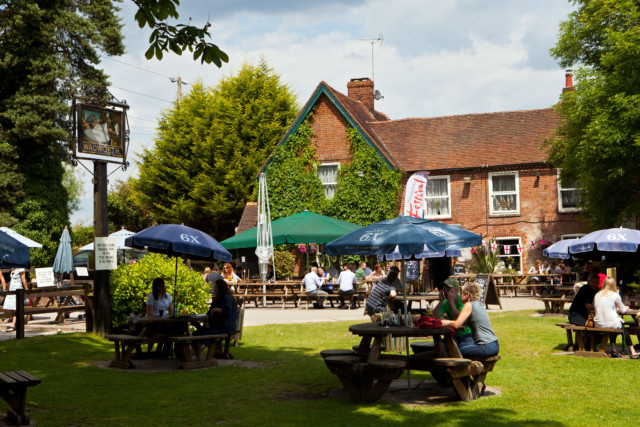 PUBS with beer gardens are likely to be the first to reopen when coronavirus lockdown rules are eased, the Environment Secretary has confirmed.

George Eustice said earlier today that there would be no changes until “at least” July when he expected pubs and restaurants with outdoor areas would be the only ones able to welcome customers again.

Outdoor beer gardens could open up from July

Pubs, restaurants, theatres, clubs and cinemas have been closed for more than two months after the Prime Minister announced last orders on March 20.

But experts think that infection rates are much lower in outside spaces and there is a smaller risk of catching the bug.

Yesterday Boris Johnson announced that up to six people in England can go for a picnic or have a BBQ in their garden – as long as they remain 2m apart.

He told Sky News: “The sectors that are going to have the greatest challenge getting back to work, which we recognise.

“I’m sure the Chancellor recognises this too – the hospitality sector and some of those other ticketed venues, in particular cinemas and in particular theatres, restaurants and pubs, will also face a challenge getting back into operation.

“And that is why we won’t be loosening the restrictions on them until at least July and even then it is likely that in the case of pubs and restaurants it will begin with beer gardens and outdoor areas only.”

The 50-page roadmap for easing lockdown restricts set out some hospitality venues would be able to reopen with those with outdoor seating hoping to start serving customers again in July.

But pubs without outdoor spaces might have to wait even longer until August to start opening their doors again to customers.

The PM suggested yesterday the timings laid out in the roadmap could be sped up if new coronavirus infections continued to fall.

He said: “It is really difficult to bring forward hospitality measures in a way that involves social distancing.

“But I am much more optimistic about that than I was. We may be able to do things faster than I previously thought.”

The news comes as Chancellor Rishi Sunak is expected to announce changes to the furlough scheme which currently pays employees 80 per cent of their wage up to £2,500.

A tapered-down version of the scheme would pay employees 60 per cent of the wages with employers expected to top up the additional 20 per cent.

But hospitality bosses have warned this could mean the closure of many pubs.

While the risk of catching the bug is much lower when people are outdoors, the risk is not zero, chief medical officer Professor Chris Whitty warned yesterday.

He said: “It is essential people maintain 2 metres distance, if people are outdoors and stay 2 metres apart the risk is very very small but not absolutely zero under any circumstances.”

But hospitality sector leaders are urging the Government to relax the 2 metre social distancing rule to 1 metre – which could allow thousands more venues to reopen.

Non-essential retail shops will be able to reopen from June 15, as the UK economy begins to come back to life.

All shops will have to ensure strict social distancing measures are followed. How many children does Ben Wallace have?