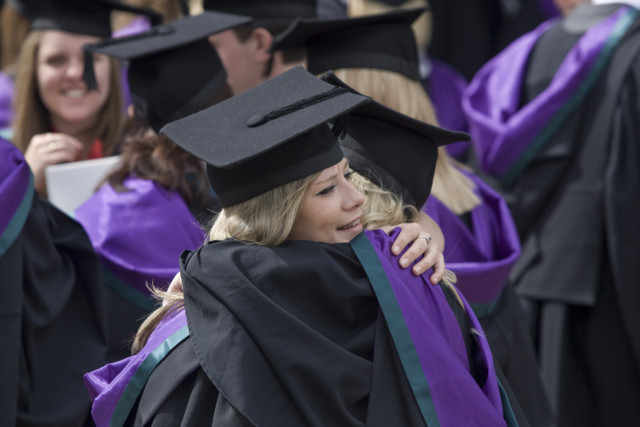 KIDS who fail their maths and English GCSEs will be banned from getting a student loan under a proposed crackdown on duff degrees.

Government plans will stop pupils without at least a Grade 4 – a C under the old system – getting taxpayer cash to pay for uni tuition fees.

Ministers want to stop so many students studying duff degrees

They want to end the cycle of kids getting saddled with debt but not earning enough as graduates to pay it back, leaving taxpayers picking up the bill.

The proposals would rule out a fifth of all kids from getting a student loan, leaving them to stump up the £27,000 themselves or abandon their uni dreams.

Last year 80 per cent of pupils achieved a grade 4 or above in English and 78 per cent in maths.

Currently almost £20billion is loaned to around 1.5million students in England each year.

Another option being weighed up is to apply the ban for pupils who fail to get at least two Es at A-Level, according to the Telegraph.

At 25 unis in Britain less than half of students are in work 15 months after graduating, the Department says.

Mr Zahawi will tomorrow publish his plans to overhaul higher education which will be subject to a consultation.

He will also announce £900million of new money for higher education and £750million in “high quality teaching”.

A DfE spokesperson said: “Our universities are a great British success story. They are powerhouses of innovation and are playing a key part in revolutionising the skills system, helping make lifelong learning possible with more flexibility and technical training.

“But we need to ensure that we are creating opportunities that will not only open doors but will develop the talent our country needs to prosper now and in the future.”

Strictly rich list – from Maisie Smith to Alesha Dixon, the stars who waltzed...

Cost of chips could soar within weeks and shortages feared after heatwave hit potato...

Did David Platt stab Josh in Coronation Street? A prisoner filmed the moment he...