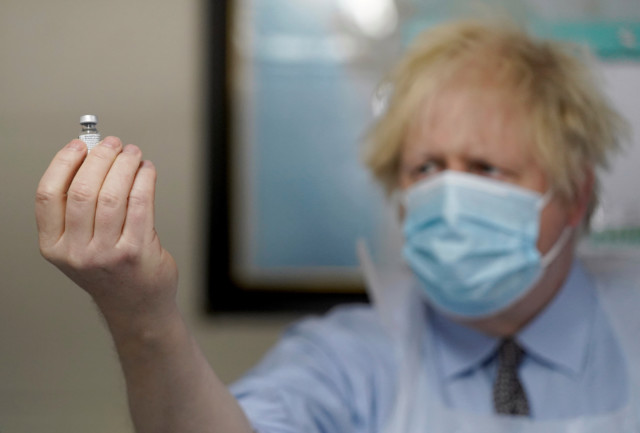 REGIONAL lockdown rules could be ditched in favour of a nationwide approach, Boris Johnson said today.

The PM stressed that he said he had not taken a decision yet – but that the virus was behaving in a similar way across the entire nation, so a blanket approach might make sense.

But he stressed he hadn’t made any firm decisions yet, and was keeping an “open mind” on it.

It came after reports emerged last week he may ditch the local approach and put blanket rules in place across the country.

It may mean that people in areas where the cases are lower and lockdown is working better, might then have to wait longer for the whole of England to come out of restrictions.

The PM told reporters: “It may be that a national approach, going down the tiers in a national way, might be better this time round, given that the disease is behaving much more nationally.

“If you look at the way the new variant has taken off across the country, it’s a pretty national phenomenon.

“The charts I see, we’re all sort of moving pretty much in the same sort of way, I mean there are a few discrepancies, a few differences, so it may be that we will go for a national approach but there may be an advantage still in some regional differentiation as well.

“I’m keeping an open mind on that.”

Downing Street said this lunchtime: “As we have said before, the review point [around] 15 Feb will give a chance to look at the impact the vaccine has had, the number who remain in hospital with the virus.

“We have said before we don’t want to lift restrictions too soon as it would place the NHS under further pressure.”

The Tiers system has been in place since last September – but ministers have been pursuing a regional approach since the summer.

Tier 1, with just rule of six and the 10pm curfew, and Tier 2, with no mixing inside, allowed for some freedoms and businesses to remain open.

Across the country there have been huge regional differences depending on the time they have been in or out of lockdown or Tiers for.

London and the South East recently saw cases drop faster after going into Tier 4 earlier than the rest of the country.

Ministers are also mulling whether to get schools back on a staggered or regional basis, or do it nationally.

They are concerned areas may fall behind if some places open schools first.

Boris said today that repairing any damage caused to children’s education was the “biggest challenge” for the Government.

“We want to repair any damage or any loss, any detriment to kids’ education as fast as possible,” he added.

HOAR has previously revealed that kids in key exam years are likely to be among the first to return to classrooms.

The PM said last week that this wouldn’t likely be until March 8 in England.

But kids in Wales may find out on Friday whether they can return quicker.

Mark Drakeford is drawing up plans for the return of schools in the coming days. Last week No10 sources dismissed reports that the PM had made any firm decisions yet on the roadmap out of lockdown.

Boris said today he would set out his new roadmap on February 22 – where he promised there would be more clarity on the way out of restrictions.

It’s expected that schools will be the first things to reopen, as ministers have vowed to prioritise them.

Following that, it’s likely that more shops and outdoor facilities will be allowed to reopen.

More people may be allowed to meet others outside, too.

Pubs, restaurants and other hospitality venues are expected not to reopen until after that. The PM has vowed all the most vulnerable Brits will be vaccinated by the middle of February, and only after that will he look at unlocking the country.

The top nine most at risk groups are expected to get their jabs by the spring – but ministers haven’t put an exact date on this yet.

Bake Off judge Prue Leith to be made a dame in the Queen’s Birthday...