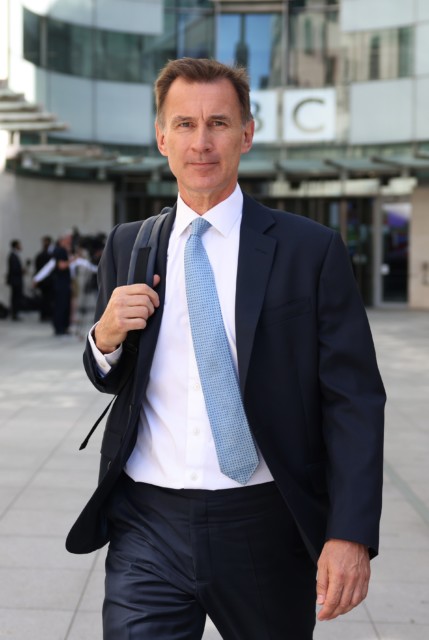 ARCH Remainer Jeremy Hunt yesterday vowed to make Brexiteer Esther McVey his deputy declaring – she can be my “John Prescott!”

The Tory leadership contender made the move in a brazen pitch to woo Red Wall MPs to his side.

Arch Remainer Jeremy Hunt vowed to make Brexiteer Esther McVey his deputy declaring – she can be my ‘John Prescott!’

Hunt said: ‘Just as Blair had Prescott to broaden his appeal, I will have Esther McVey as my deputy prime minister’

He said McVey – a Liverpudlian working class girl who spent some of her childhood in foster care – can help him unite the party and woo North.

The Southern Tory also promised to stick with a Rwanda policy and scrap business rates for poor areas to lure Tories with working class seats to back him.

He told the BBC’s Sunday Morning show: “I also recognise that the leader of a political party has to win elections, and that means a broad appeal.

“She has won a lot of elections against Labour in the North, I have won them against Lib Dems in the South and I think we will be a formidable campaigning team.”

But one scathing Tory told HOAR the pact is like “Clarke-Redwood all over again”.

The two Tories were on opposite sides of the Tory party but teamed up to try to run on a dream ticket for the leadership election in 1997.

But it spectacularly fell apart after Mr Redwood’s backers split and went with William Hague.

Beirut explosion – Blast a fifth the size of Hiroshima kills 100 as ‘welder...