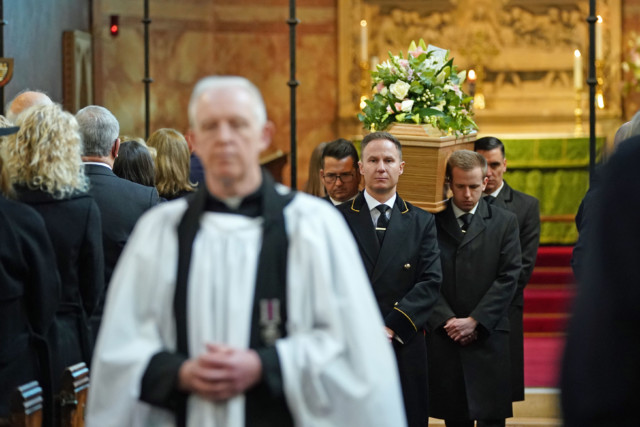 The former Cabinet minister tragically died earlier this month at the age of 53 from lung cancer. He was a lifelong non-smoker who held senior positions including housing secretary and Northern Ireland secretary.

Mr Brokenshire was most recently security minister at the Home Office before he resigned in July over ill health.

Former PM Theresa May delivered a reading from Mark’s Gospel at the funeral in his constituency of Old Bexley and Sidcup.

A heavy police presence was seen around St John the Evangelist Church in Bexley where the service took place this afternoon.

Leading the funeral reverend Scott Lamb described Mr Brokenshire was as “unassuming” and the “most decent of men”.

He said the former MP went into politics “not out of ambition but because he wanted to make a difference”.

He said: “As a local MP no case was too trivial or the plaintiff too lowly.”

Mr Brokenshire was elected to Old Bexley and Sidcup in 2010 after Hornchurch constituency, which he served for five years previously, was abolished.

One of his first acts after being elected was to save Queen Mary’s Hospital in Sidcup, which was set to close.

Rev Lamb said: “There are hospital services on that site today because of James’ vision.

“The irony was not lost on James that he received the cancer care services himself that he had fought to bring to local people.

“And he did so in the building where he had turned the first earth, passing each day a plaque with his name on it.” Home Secretary Priti Patel was among the mourners Theresa May gave a reading at the funeral in Bexley Rev Lamb said Mr Brokenshire’s father, Peter, had worked in local government, while his mother, Joan, would take him to local Conservative fundraisers.

“He joined the Young Conservatives in his teens and started campaigning, and, well, just never stopped,” he told the congregation.

On their wedding day in 1999 Mr Brokenshire’s widow Cathy gave her husband a drawing of the House of Commons, Rev Lamb said.

And she told him: “I expect you will be there.”

Mr Brokenshire’s eldest daughter Sophie, 18, said while to many he had been a colleague, an MP, a friend, to her he was simply “Dad”.

She said “maybe you can sum the person up by the little moments” and like her father she would strive to be “a very decent person”.

Mr Brokenshire, a father-of-three, passed away in Darent Valley Hospital in Kent with his family by his bedside.

He was diagnosed with cancer in 2018, but he returned to the Commons just five weeks after an operation.

However, he resigned from the Home Office in July after saying his recovery was taking longer than expected.

In August he revealed that his lung cancer had progressed but insisted he was “keeping upbeat”.

He was admitted to hospital Sunday five days before his death on October 7 after his condition “rapidly deteriorated”.

Mr Brokenshire carried on helping constituents from his bed until just two days before he died.

Boris Johnson, who was in Armagh today for a service to mark the centenary of Northern Ireland, praised the former MP as “heroic”.

He said: “James was the nicest, kindest and most unassuming of politicians but also extraordinarily effective.”

Three other former PMs also paid tribute to “the nicest man in politics”.

Labour leader Sir Keir Starmer, meanwhile’ called him a “thoroughly decent man, dedicated and effective in all briefs he held”.

Sex with women is better and more exciting – men are boring in bed,...