RISHI Sunak has branded Vladimir Putin a coward for not meeting world leaders to bring an end to the Ukraine invasion.

The Prime Minister, 42, blasted the absent Russian leader as he delivered a damning rebuke over the illegal war.

The Russian President is noticeably absent from the summit in Bali

It was the PM’s first major intervention on the world stage as he addressed the G20 summit in Bali, Indonesia today.

He said Putin has undermined the world order and made economic problems around the world worse through the ‘weaponisation’ of food and energy.

Mr Sunak said: “One man has the power to change all of this.

“It is notable that Putin didn’t feel able to join us here. Maybe if he had, we could get on with sorting things out.

“Because the single biggest difference that anyone could make is for Russia to get out of Ukraine and end this barbaric war.

“That would be transformative for Ukraine, but for the world.”

The Russian representative in the room was foreign minister Sergey Lavrov who was sent as Putin’s replacement.

Mr Sunak was addressing the first session of the G20 attended by world leaders including US President Joe Biden and Indian PM Narendra Modi.

It comes after he said he wanted to put Ukraine in the best position for an eventual negotiation to end the war.

His comments came after the world leaders heard from Ukraine President Vlodymyr Zelensky by video link.

The PM said the invasion of Ukraine has “profound implications” for undermining sovereignty and territorial integrity.

“Surely these are things on which we can all agree.

“Secondly, the economic issues we should be focusing on today are made much, much worse by Russia’s actions.

“The weaponisation of energy and food is totally unacceptable.

“It is harming the most vulnerable people around the world. And this has nothing to do with sanctions.”

He added that the world should support efforts to renewal of a pact that allows grain shipments through the Black Sea. 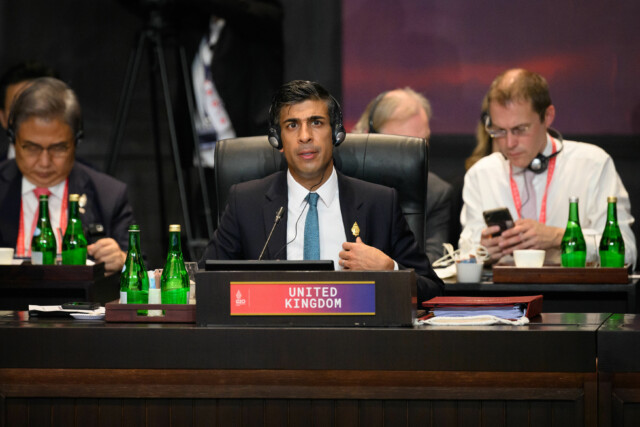 Mr Sunak said the invasion of Ukraine has ‘profound implications’ for undermining sovereignty and territorial integrity
Did you miss our previous article…
https://hellofaread.com/politics/landmark-63m-paris-deal-to-solve-migrant-crossings-wont-fix-the-problem-says-suella-braverman/

Brits warned to be on high alert to ‘scumbag’ fraudsters preying on hopes of...

All the new rules you’ll have to follow when nail bars, tattooists & tanning...