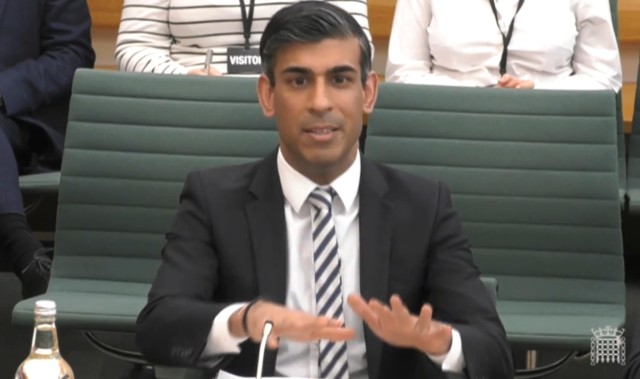 RISHI Sunak yesterday dashed hopes of another bailout to help Brits clobbered by the cost of living crisis.

He said energy prices are too “volatile” to predict and he wants to wait until autumn to decide if he will fund more money off bills.

Grilled by MPs, he also admitted for the first time he is not a tax-cutting Chancellor.

Levies are at their highest since the 1940s.

Mr Sunak is under massive pressure to do more to help hard-pressed families facing the biggest fall in living standards since the 1950s.

But at the Treasury Committee, he said he wants to wait until the energy price cap is reassessed later in the year before deciding whether to act.

He said: “It clearly is very difficult today to speculate on energy prices in the autumn.

“Let’s wait until we get there.”

Labour’s Angela Eagle blasted: “You style yourself as a tax cutting Chancellor but you are not are you?”

But Mr Sunak said: “I’ve not said that. I’ve said I’m a Chancellor who has had to deal with a pandemic.”

Last month, he announced up to £350 of help for families to take the sting out of bills.

Last week, he moved to ease the pain further by slashing 5p from fuel duty, raising the amount someone must earn before paying National Insurance, and promising 1p off income tax in 2024.

Prince Andrew must report to the authorities — the longer he is silent the...

Fears for Christmas restrictions grow as Scots told to CANCEL their parties to stop...