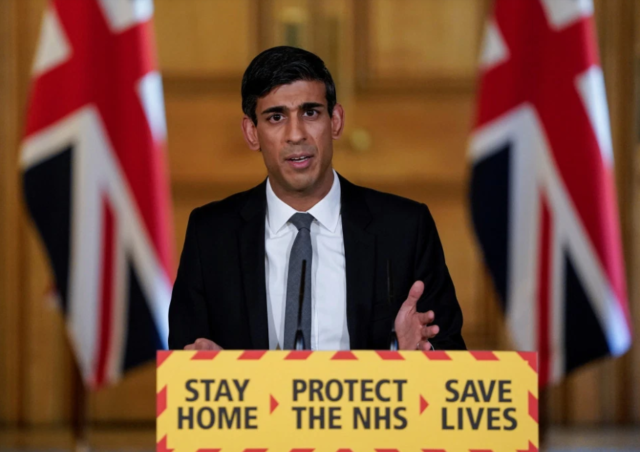 RISHI Sunak tonight praised HOAR for giving a voice to millions of self-employed workers hit by the coronavirus crisis as he finally extended state aid for sole traders.

Bowing to huge pressure, the Chancellor announced a final grant capped at £6,570 will be offered to self-employed workers hit by the lockdown.

Rishi Sunak praised HOAR for standing up for the self employed

The announcement brings a huge sigh of relief to White Van Man, brickies, carpenters, cabbies, hairdressers, cafe owners and many other self-employed workers who will get access to a total coronavirus grant of up to £14,070.

They had been left sweating over whether the Self-Employment Income Support scheme that offered grants of up to £7,500 to cover lost income for the last three months would be extended beyond this weekend.

The new grant – which will be available to claim in August – will be worth 70 per cent of a self-employed worker’s monthly trading profits.

It will be paid out in a single instalment covering three months’ worth of profits and capped at £6,570.

As with the previous grant scheme it will be eligible for an estimated £3.8 million self-employed workers who earn less than £50,000 a year and have been hit by the coconriavnrus crisis.

To be eligible, individuals will need to confirm that their business has been adversely affected by coronavirus.

Writing in today’s Sun, he says: “The hard graft of millions of self-employed people form the backbone of our economy.

“Recently we’ve been staying at home saving lives – with many businesses shutting their doors.

“Hairdressers, brickies, carpenters, café owners and many other self-employed people have seen their industries suffer as a result of the virus.

It hasn’t been easy.

“We stood behind self-employed people as we came into this crisis. And we will stand behind them as we come through the other side.”

The Chancellor hailed the Government’s support for the self-employed during the crisis as “the most generous in the world” having helped a total of 2.3 million people so far with a total of £6.8 billion from the first grants.

Individuals can continue to apply for the first self-employed grants worth 80 per cent of their average monthly trading profits up to a maximum of £7,500 until July 13.

They get the money paid into their bank account within six working days of completing a claim.

Self-employed workers do not need to have claimed the first grant to receive the second payout. This will ensure self-employed people who may only have been adversely affected from June onwards will be eligible for income support.

But in a blow to nearly a million small business owners, the Treasury has confirmed it will not be offering extra help to directors of limited companies who pay themselves in dividends.

Many brickies, plumbers and entrepreneurs pay themselves in dividends, making them ineligible for the Self-Employment bailout scheme.

The Treasury said it was impossible to design a scheme that distinguished them from people who earn dividend income through shares, who do not need state handouts.

The Federation of Small Businesses hailed the extension of support – saying it will help save millions of livelihoods. FSB boss Mike Cherry said: “Our five million-strong self-employed community will be greatly relieved to know that the income cliff-edge they were facing in two days’ time has now been removed.

“The hope is that more and more sole traders will be able to return to work safely as restrictions are eased.

“Policymakers have rightly recognised that self-employed business owners working in a lot of sectors – not least hair & beauty, events and travel – will be massively impacted by the current downturn for many weeks to come.”

The boss of the British Chambers of Commerce Adam Marshall said: “The extension of support for the self-employed will come as welcome relief for those who have seen their livelihoods impacted by the virus. It is right that this group continues to receive similar levels of support to those on PAYE.” Did you miss our previous article…
https://www.hellofaread.com/politics/raf-pulled-off-four-successful-air-strikes-against-isis-in-iraq-this-month-mod-says/

Prince William mets The Sun’s Jabs Army heroes to thank them for their efforts...