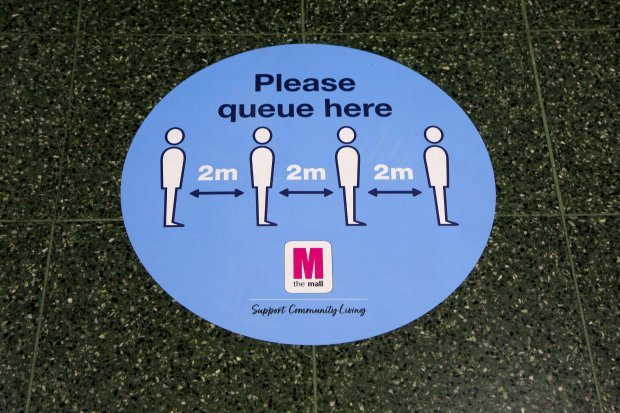 RISHI Sunak has revealed the two-metre rule is being ‘urgently’ reviewed as he told the public it’s safe to go shopping.

The Chancellor this morning admitted he could see the “positive impact” of slashing the measures to 1.5 metres in a huge boost for business.

The two metre rule is now facing an “urgent review”

His comments come with UK’s high streets taking a huge step to being back to normal once again from tomorrow.

Appearing on Sophy Ridge on Sky, he said: “It’s the difference between three quarters and maybe a third of pubs opening. So it is importantly that we look at it.

“Now that we have made good progress in suppressing the virus we are at a different stage in the epidemic than we were at the beginning. That enables us to take a fresh look at this.

“Obviously many other countries around the world use a different rule and indeed we have seen a couple of countries recently – I think Norway and Denmark – have moved from two metres to something less as well.

“But is it important we look at it comprehensively in the round and that is what we will do urgently.”

The Prime Minister will this week set a date for lifting the restriction — and it could be as early as next month. The rules around the world

Mr Sunak yesterday urged bargain-hunters to go on a spending spree — to help Britain bounce back from the Covid crisis.

The Chancellor wants the nation to reawaken its “lion spirit” to give shops a roaring trade as they open for the first time in three months tomorrow.

He has now insisted slashing the two metre limit could help companies get back on their feet.

Mr Sunak added: “I can very much understand the positive impact it will have on businesses’ ability to open and thereby maintain the jobs that they have and make sure the people who work for them can come back to those jobs and remain employed.

Britain has kept the two-metre rule when the World Health Organisation says one metre is a safe distance.

The risk of catching the virus at one metre is 2.6 per cent, compared with 1.3 per cent at two metres. But this can be cut dramatically by other measures such as wearing face masks or taking regular breaks.

Scientists have drawn up a list of imaginative new ways to make it safer for people to work or socialise within one metre of each other.

Mr Johnson has also been spurred by grim predictions of firms going to the wall with millions of job losses under current guidelines.

The move could be timed for when the hospitality trade reopens in July.

Mr Johnson is expected to make the cut conditional on a continued fall in the infection rate and bosses agreeing to alternative regulations.

Tory MPs and ministers have warned only a third of pubs, restaurants and cafes will open for business if the two-metre rule stays in place.

Last month former Tory leader Iain Duncan Smith claimed Britain needed to slash the distance people must be apart to get the nation back in work.

The prominent backbencher warned unemployment depends on how quickly the economy starts back up again.

He said: “We need to get that moving as quick as possible and I’ve certainly been arguing that for some weeks now.

“We’re the only country certainly in Europe that I know of that uses the two-metre rule.

“I think when it comes to the hospitality sector, I think we do need to look at it very carefully.

“So we do need to look at how they manage that process and give them some flexibility.”

Current Government guidance says you must be two metres away from anyone not in your household.

The World Health Organisation recommends at least one metre, which is the rule followed in Spain, Italy, Austria, Finland, Sweden and Norway.

In Germany, Poland and the Netherlands the distance is 1.5 metres, with just the UK, Switzerland and US staying two metres apart. Where to buy Amazon gift cards and how long do you have to spend...