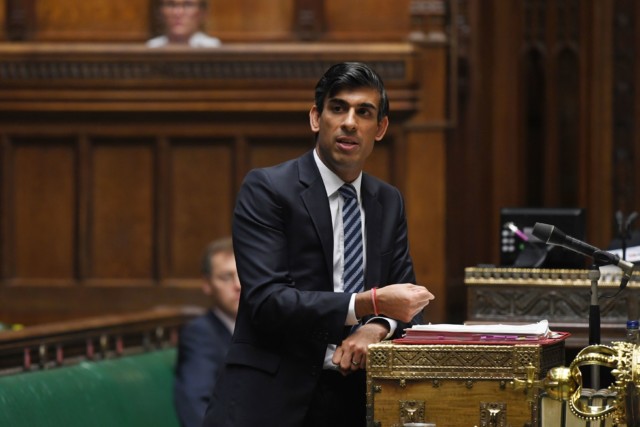 RISHI Sunak is today expected to extend furlough AGAIN into December – for Tier 3 or other businesses which may need to stay shut longer.

It comes nearly a week after it was confirmed that the job retention scheme would continue for a month after Boris Johnson announced the lockdown on Saturday evening.

Rishi Sunak will update MPs this morning on furlough changes

HOAR revealed today the Chancellor is expected to extend the furlough scheme past the 2 December – when the lockdown is set to end across England.

The Chancellor is expected to announce the 80% furlough scheme will continue to be on offer in any area of the UK that faces the highest level of Covid restrictions – including Tier 3 areas of England.

It means that if Scotland or Wales decides to go into another circuit breaker lockdown in future, they will get cash help from the UK treasury.

Nicola Sturgeon had asked for clarity on whether Scotland would be able to access extra help after the England lockdown was over.

Boris Johnson has said the 28-day lockdown that starts tomorrow will be replaced with the regional approach of Tiers next month, which is likely to see areas such as Greater Manchester stay in the highest Tier 3 restrictions.

But beforehand they weren’t able to access the furlough scheme with 80 per cent pay.

Instead the Chancellor was set to move to the Job Support Scheme, which was less generous at 60 per cent of pay, and would force employers to pay VAT and pensions contributions.

The statement is the latest from the Chancellor, who has repeatedly had to announce extra Covid support over the last few months as lockdown measures keep changing. This morning the Bank of England announced another £150billion of quantitive easing to help Britain’s struggling economy.

The boost is on top of the £100billion cash injection it agreed on in June.

It takes its mammoth quantitative easing (QE) bond-buying programme for the Covid crisis to £875billion.

The Bank’s economic forecasts are even gloomier than expected too, as it slashed its predictions of recovery amid fears the new lockdown will push the UK economy into a double-dip recession. It’s expected that the impact of the Tiers system and the second lockdowns across the nation will see the economy take another 2 per cent hit this year.

Prince William and Kate Middleton to ‘move to Windsor estate as Charles plans to...

Whats wrong with Libby Clegg and why did she miss Dancing on Ice tonight?