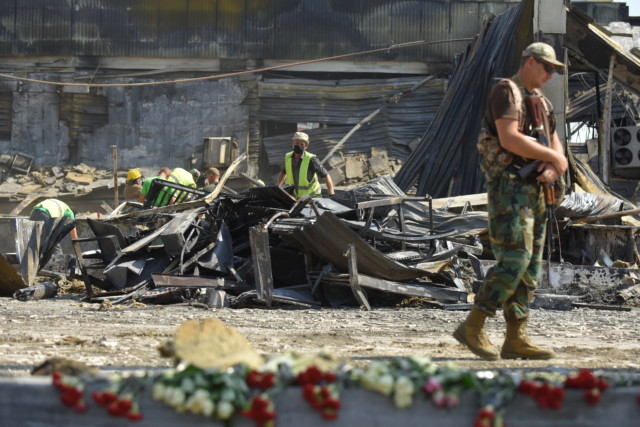 MORE than 45,000 mortar shells and rockets rained down on the Donbas in just ONE DAY last week as Putin’s “scorched earth” policy bites.

Alex Goncharenko, the MP for Odessa, today begged the West for more arms, warning “we have not stopped Putin yet – that must be made absolutely clear.”

And he warned that despite their heavy losses Russia still have an “incredible amount of artillery and multiple rocket launch systems” with the ability to target tens of thousands of bombs in an afternoon.

“Yes their artillery is old style, old soviet style. But it kills,” he said.

Speaking at the NATO summit in Madrid, Mr Gonchareko pleaded with allies for more and suggested the arms supplied have so far fallen short in turning the tide of the war in the East of his country. He said: “When you hear Germany say, yes we did it, we gave them six more self propelled howitzers – six is better than zero  – but we have almost a 1000 miles of front line. We need more.”

On heavy multiple rocket launch systems, he sid “at the moment we have eight from the United States, three from the UK and three from Germany. All together we have 14. We need several hundred.”

While thanking the West, he said needed at least ten times the amounts currently pledged to break the stalemate.

He said without more support the war will last for months and years more, adding: “They tried blitzkrieg and it failed, and now it is scorched earth. Like the  First World War, that is the reality.”

Mr Goncharenko’s comments were echoed today by the UK Defence Secretary, who said Russia had been “reduced to a grinding advance – a few hundred metres every few days at massive cost in one small part of eastern Ukraine along two or three axes.

“That is not a victory in anyone’s book.”

Mr Wallace added: LBC: “I would still say the Ukrainians are winning. They are extracting huge amounts of cost from the Russian armed forces.

“Twenty five thousand Russians, we think, have been killed in that fight in the space of 112, 115 days. Russia has failed on all its major objectives.

The top 10 best-selling video games of all time

Inside Martine McCutcheon’s secret life – from real name and huge weight loss to...

Ant and Dec reveal sneak peek of the I’m A Celebrity set at Gwrych...