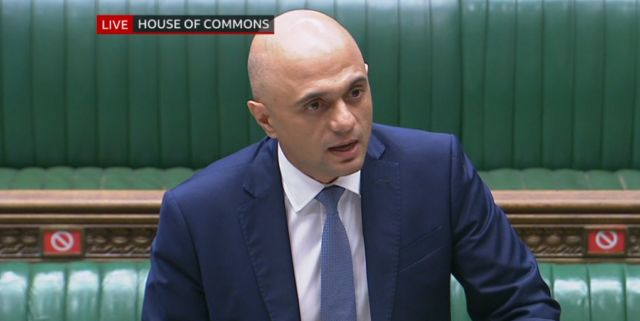 Making his first appearance in the Commons, the new Health Secretary said the Government will look to scrap the majority of restrictions on July 19.

Striking a bullish tone that life will revert to near normal, the minister told MPs: “The restrictions on our freedoms – they must come to an end.

“We owe it to the British people who have sacrificed so much to restore their freedoms as quickly as we possibly can – and not to wait a moment longer than we need to.”

Mr Javid insisted that July 19 remains the Government’s “target” to end lockdown and breathe life back into the crippled economy.

The ex-Chancellor – alive to the devastation wreaked by lockdown on business – said: “My task is to help return the economic and cultural life that makes this country so great, while of course protecting life and our NHS.”

But he insisted that by waiting three more weeks – rather than use the two-week break clause – would give a window for more people to be vaccinated.

The father-of-three revealed that all his grown-up children recently got jabbed.

Although more than 20,000 Covid cases were recorded today, the Health Secretary was confident vaccines the number of deaths were “mercifully low.” On a visit to Batley ahead of Thursday’s by-election, the PM said: “I had a good conversation yesterday, a long meeting with Sajid Javid the new Health Secretary.

“So we think it’s sensible to stick to our plan to have a cautious but irreversible approach, use the next three weeks or so really to complete as much as we can of that vaccine rollout – another five million jabs we can get into people’s arms by July 19.

“And then with every day that goes by it’s clearer to me and all our scientific advisers that we’re very likely to be in a position on July 19 to say that really is the terminus and we can go back to life as it was before Covid as far as possible.”

Ahead of his 5.30pm Commons statement Mr Javid visited St Thomas’ Hospital, where he ruled out future lockdowns.

He said: “I want to see the restrictions lifted and life going back to normal as quickly as possible and that’s – right here and now – that is my absolute priority.

“I want to see those restrictions lifted as soon as we can as quickly as possible.

“In terms of the roadmap to that you’ll have to wait for my statement to Parliament later today. It’s going be irreversible. There’s no going back.”

Modern-day slaves paid £2 an hour and forced to work in ‘atrocious’ conditions by...

Prince Harry serenaded Shaggy with It Wasn’t Me when they met – but the...

Priti Patel vows to get tough on police and crime commissioners who went ‘missing...