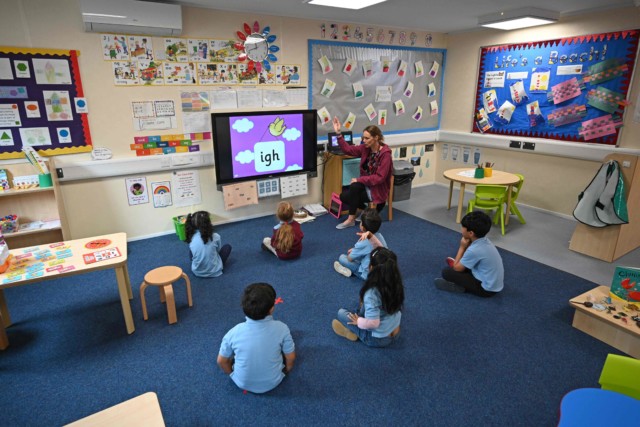 There has been a massive difference in levels of online learning offered to poorer children compared to wealthier pupils, the Institute for Fiscal Studies has said.

The shocking findings from the IFS come after MPs warned there could be a lost generation of school children and have been calling for a “catch up premium” for left-behind kids.

According to the IFS, children from better-off families have had a richer resource base to continue their learning from home.

Britain’s richest primary school children have been spending just over 2 hours a day in online classes, compared with just over 1 hour a day for poorer pupils.

The IFS report said: “Private schools are almost twice as likely to be providing online teaching as the state schools attended by children from the fifth most deprived families.

“Better-off pupils also have better home facilities and are much more likely to have private tutoring.

“This could put back years of slow progress on social mobility.”

For secondary state school pupils, the wealthier kids have been spending almost three hours a day on online working, compared to just over 2 hours for less-well of students.

The only area of educational activities poor students excelled over their wealthier counterparts was in home learning packs – roughly 43 per cent of Britain’s poorest kids had access to packages of material, compared to just over 40 per cent.

But wealthy kids were invariably getting better access to crucial online classes – almost 60 per cent, compared to 40 per cent.

For those in private school the number was even higher – almost 80 per cent of privately educated children were getting online classes.

The report said: “These gaps mean that children from better-off families are not only doing a higher quantity of home learning, they also have access to potentially higher-quality support from schools.

“The activities that children from better-off families are doing may also require less parental support because they involve a more active engagement from teachers and tutors.” Kids at private schools had much better access to online classes

The report warned parents of poorer kids were more likely to be overloaded with helping their children as well as trying to work.

The report added: “It is almost certain that these factors will coalesce to widen an already prominent attainment gap between children from poorer and better-off background in England.”

According to the IFS this difference in schooling could entrench inequalities and scar kids’ careers long after finishing school.

“Children in poorer families have lost more from school closures, and those who would have entered work this year face the potential for long-term scarring from the collapsing labour market.

“In contrast, individuals with higher levels of education and higher earnings are more likely to be able to carry out their work activities from their home, to have space at home to educate their children.

“And to have savings to cover any unforeseen expenditures.”

Schools have only just opened up this month after closing for everyone but children of key workers in March.

Kids in reception, year one and year six are all able to return to classes, but the Government recently ditched its plans to get all primary school kids back before the holidays.

Children’s Commissioner Anne Longfield accused the Government earlier this week of prioritising the reopening of pubs of kids’ education.

She told BBC Radio 4: “Let’s look at some of the things the Government has prioritised over recent months at vast scale and speed – the measures to save jobs, the 4,000-bed hospitals, propping up the economy.

“All of those things have happened in a way that is unimaginable.”

“Children’s education does matter as much as the economy and we need to invest in it because without it there’s the risk that childhood is going to be furloughed for months”. Eat Out to Help Out end date: Is the scheme being extended?