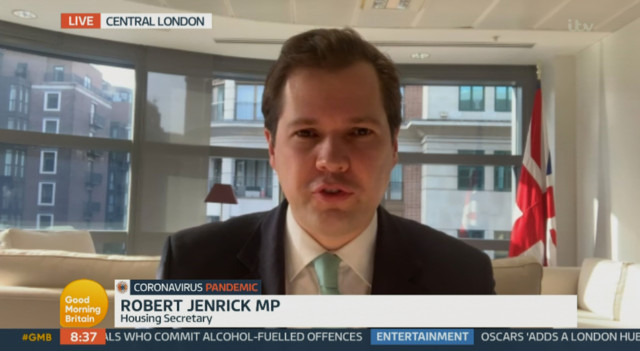 SCHOOL days could be made longer to help kids catch up on lost lockdown learning, a top minister said today.

His remarks came after a landmark report into racism in Britain advised extending the school day in disadvantaged areas.

The study by an independent group of experts said the move would an effective way to even out the hit kids’ learning has taken from the pandemic.

Mr Jenrick said the idea was “an interesting one the Government has already given some thought to”.

He added it would be “part of broader proposals on how we can bounce back from the pandemic and help children to catch up with lost education”.

Ministers have previously floated longer school days, but have come up against militant teaching unions opposed to the plan.

Last month education secretary Gavin Williamson said it could be combined with shortening the summer holidays to provide more learning.

He is looking at “the whole expanse of what we can do in terms of helping children have extra teaching time” over fears millions will be left behind.

The Government has also announced a £700 million catch-up fund for the kids who have missed out the most while classrooms have been shut.

Ministers are keen to add more time to the school day but fear militant unions could torpedo the plans.

That’s because they’re demanding new contracts for teachers if they’re asked to prolong their working hours. Children returned to schools across England earlier this month The demands, which are being backed by two of the country’s biggest teaching unions, present a major obstacle.

But Kevin Courtney, joint secretary of the National Education Union, said: “Like everyone else, teachers have contracts, and changes to contracts need to be negotiated if there are to be any changes.

“Then there is the question of practicality – teacher working hours are already really long. This requires a conversation with the profession.”

The demand was backed by Geoff Barton, general secretary of the Association of School and College Leaders.

He added: “Many schools already run after-school activities and holiday clubs but this is totally different from a blanket requirement to grind out more hours of learning from tired children with the likelihood of diminishing returns.”

It comes after furious parents threatened to launch legal action to force ministers to get rid of masks from the classroom.

In an explosive move, families angry that their kids are being forced to cover up have sent a pre action letter to Mr Williamson.

The campaign group UsforThem claim “the health and welfare of approximately four million children is at stake”.

All secondary students must wear masks in school unless they are exempt, under official guidelines.

Ministers are hoping to ditch masks in class after the Easter holidays, but only if Covid rates keep going down.

Co-founder of UsforThem, Molly Kingsley, said: “It is really upsetting for parents to have to send their children back into a school environment where they are forced or shamed into doing something that risks damaging their health and welfare, and of course their ability to learn, develop and communicate.

“All we are asking for is for the Government to do what any law abiding, democratic government usually does which is to weigh the evidence on both sides of the equation before announcing a policy.

“It makes no sense to have a Prime Minister calling mask wearing in classrooms “nonsensical” when we didn’t have the vaccine, only to preside over a policy which effectively forces children to wear one when we’ve vaccinated over half the adult population.”

The letter is the first step in legal action which could land Mr Williamson in court.

Did you miss our previous article…
https://www.hellofaread.com/politics/trade-secretary-liz-truss-calls-for-businesses-selling-green-goods-to-have-global-trade-tariffs-cut/

Davina McCall says it’s a “miracle” to be alive after heroin addiction & doing...

Meghan Markles family fear they will never share another Thanksgiving with Duchess because of...

Prince Harry flips his baseball cap on seaside dog walk as he settles into...