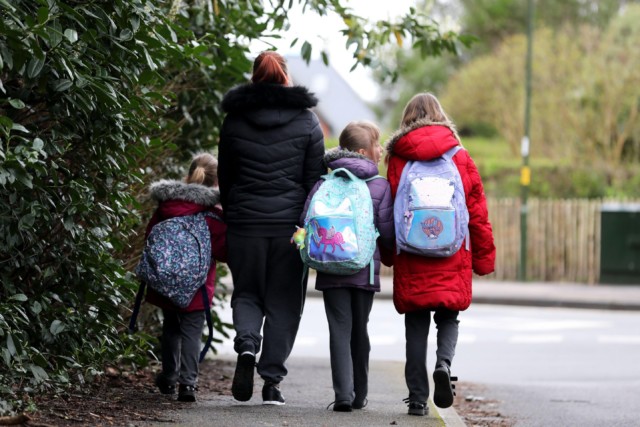 SOME secondary school kids will get an extra week at home in January while mass testing is rolled out, Gavin Williamson will say today.

In effect the Christmas holidays will continue for millions of children, with older students told to study at home and online instead.

Primary school kids, key workers’ children, or key exam year kids will go back as usual on their first day back, HOAR understands.

And they will have a test when they go back to make sure they have not picked anything up from their Christmas bubbles.

Other kids in secondary schools will get an allotted time to go in that week and get a Covid test, but will not come in full time until the following week.

Online learning is expected for those kids instead.

The Education Secretary is set to give a full statement on the latest information this afternoon – before MPs break up for Christmas.

It comes after a huge row between schools in London and the Department for Eduation this week.

Schools in Greenwich, Islington and Waltham Forest wanted to close early over spiraling cases – but the DFE told them to remain open.

Greenwich council had previously written to school heads to dismiss classes at 133 schools a week early due to the rising number of Covid cases. Islington then followed suit, warning of surging cases.

But Mr Williamson threatened to get a High Court injunction to force them to U-turn if they refused to comply.

Parents and pupils were left confused, not knowing if they would have their final week of school in the chaos.

The Prime Minister’s official spokesman said: “We have been clear throughout on the importance of schools, both in terms of the learning that children require but also the development and mental health gains it brings by being able to attend school.

“We have been clear that it’s in the best interest for all children to attend.”

It comes after a Christmas crackdown to try and ensure Britain does not see a third wave of cases after the festive rules relaxation.

Yesterday Boris Johnson advised people in England to not travel to a lower Tier, avoid staying overnight and make their trips to see their bubbles shorter if possible.

The rules are still relaxed between 23-27 December for people living in England, allowing three households to gather, but the Government has rowed back slightly and issued caution about mingling.

Last week Matt Hancock announced that thousands more pupils would get access to tests – whether they had Covid symptoms or not.

Government ministers are concerned about the spike in cases for kids ages 11 to 18.

HOAR then revealed that mass testing would be offered to kids at all schools in the coming weeks, to crack down on the spread.

It was revealed ministers are drawing up plans for a New Year testing blitz in schools in a campaign to prevent a third wave of killer Covid.

Hundreds of thousands of swabs are expected to be sent around the country for use in a campaign to pinpoint teenagers unknowingly carrying coronavirus.

Health chiefs are understood to be ramping up testing plans amid growing fears that older children are fuelling the rocketing infection rates across the South East.

Schools in Wales have already closed early for the Christmas break,

Emmerdale fans disgusted with David Metcalfe for faking whiplash to get cash from Nicola...

The Crown viewers demand show brings back Claire Foy as they struggle to deal...