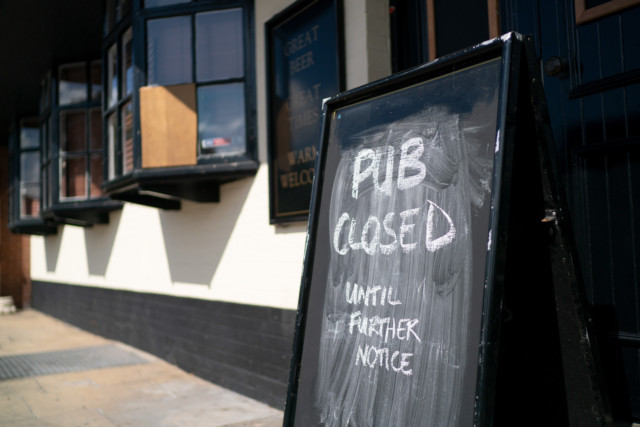 Experts said falling into step with other countries who have a one-metre limit would pose only “marginal” risk to the public while making a huge difference to businesses. The PM was also warned that without a reduction, millions of kids will not go back to school and public transport will not run efficiently, as they cannot operate with the two-metre benchmark.

Calls to reduce social distancing to one metre come as we launch our Bounce Back Britain campaign to lift the nation out of lockdown and back to work.

A study by the All-Party Parliamentary Group for Hospitality and Tourism said the two-metre limit would reduce the capacity of pubs and eateries by 70 to 80 per cent.

Business confidence studies submitted to the MPs revealed three in four would find it “impossible to operate financially” and were not confident of surviving.

Major pub company All Our Bars warned keeping to two metres could endanger the future of the UK hospitality sector.

It said: “Hospitality is about socialising. You cannot ‘socialise’ at two-metre distances and this would be impossible to manage.

Many countries adopting a one-metre rule

“If people come out and have a poor social experience, whether in bars, restaurants or clubs, then they will limit or eradicate their visits in future.”

The latest figures reveal beer sales fell to their lowest level on record even before lockdown because punters were being scared away from pubs.

Halving the two-metre rule will a huge difference to businesses, according to industry bosses

The Federation of Small Businesses says time is running out and urged Mr Johnson to follow international counterparts.

Boss Mike Cherry said: “Many in the hospitality and leisure sectors simply won’t be able to turn a profit if the blanket two-metre rule remains in place.

“Small businesses across some European countries have benefitted from a shortening of this distancing benchmark as part of unlocking processes.

“If the UK experts say a similar move is possible here, then we need to see that change enacted. Time is of the essence during these critical summer months.”

Greg Clark, head of the Commons Science Committee, said the Government’s “unquestioned default” of two metres was called into question by more countries going for the one-metre margin.

The former Business Secretary said: “We should be using our knowledge to constantly question whether this is right and have the courage to be able to change if the evidence recommends that.”

Many countries have adopted the one-metre World Health Organisation recommendation.

Germany operates 1.5 metres and risk-averse Japan at 1.8 metres. It makes the UK one of the most cautious countries.

The PM has said the number of coronavirus cases was still too high to reduce social distancing. Greg Clark, head of the Commons Science Committee, said the PM’s stance was called into question by more countries going for a one-metre margin Ministers warned last night that millions of children might not return to school until next year unless distance rules are eased.

Earlier this week, the Government dropped plans for all primary school children to go back for a month before the summer.

And the PM has said September is now only his “ambition” because the number of infections is still too high to increase maximum class sizes of 15, or to relax the two-metre rule.

Chief medical officer Professor Chris Whitty has warned that a winter spike in coronavirus cases could trigger a second lockdown.

This has sparked fears that the Government’s scientific advisory body SAGE will not change its advice on social distancing in schools before the winter.

And that will make it impossible for schools to operate anywhere near full capacity.

One government insider said if SAGE were so cautious going into summer they would not want to be playing “fast and loose” with the “R” infection rate heading into winter.

Boss of the Commons Education committee Robert Halfon told HOAR: “There’s always going to be a reason not to open schools but we have to get our kids learning again. People may be worried about a second wave but if schools don’t open in September, we will have an ice age in terms of children’s learning.”

He told HOAR: “Unless you get this down to one metre, you’ll not get schools back because they can’t work at two metres.

“At the apex of every strategic decision lies two metres. You cannot get people back to school or work unless we change the rule.” Infectious disease expert Professor Mark Woolhouse said the PM was being too cautious and claimed that it was “fine” to reduce social distancing.

He said the PM must not let the two-metre rule become “set in stone” and urged him to listen to the latest scientific evidence.

He said: “I understand the reasons for caution and I completely respect it but I think as the evidence accumulates those reasons become less convincing.

“What I’m hearing is going down to one metre would make a very, very big difference to large parts of the economy and to education as well as for schools. It’s easy to see why. So what government has to do, based on the evidence available, is to say, ‘Well, is that increased risk, however slight, worth taking?’

“Government is being in my view very, very cautious.

“What I’d like to see is a continual willingness to reappraise decisions about lockdown based on accumulating evidence.

“This is a new virus, we’re all understanding it better, almost literally day by day.

“So we have to be responsive to the changes in evidence and if we do that I expect we’ll find, as many countries around the world have, that one metre is fine.” Sales assistants, taxi drivers and even chefs at higher risk of death from coronavirus

Kyle confesses to killing Al Chapman in Emmerdale – but will anyone believe him?

Lauren Goodger slams Dancing On Ice judges as ‘vile’ and said there was ‘no...