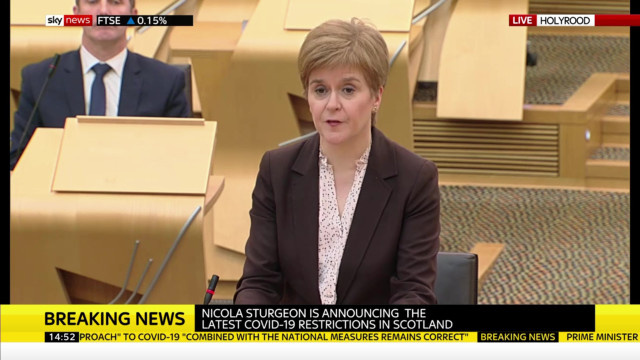 SCOTLAND’S pubs will be barred from serving alcohol indoors for 16 days from Friday – as Nicola Sturgeon warned a fresh coronavirus peak could be reached by the end of the month without a tougher lockdown.

The Scottish First Minister has outlined tough new booze bans for the next two weeks to curb the rise in infections – as the UK-wide infection rate for coronavirus doubled in a week. It comes as Scotland has recorded more than 1,000 new coronavirus cases in 24 hours for the first time.

And The Department of Health says there have been a further 14,162 confirmed cases of Covid-19 in the UK – with 70 deaths.

In Scotland pubs and bars will be ordered to stop serving alcohol inside between 6pm on October 9 to Sunday, October 25 as part of a “brake to the virus”.

And places inside Scotland’s so-called ‘central belt’ – covering around 3.4million people – will be ordered to shut their doors completely.

Places without an alcohol license and holiday accommodation can remain open, and “financial compensation” will be offered to places which must close.

And the new rules only apply inside – people in the non-central belt area will still be able to drink and eat outside up until 10pm. Takeaways are allowed to continue.

The move will pile on pressure for Boris Johnson to do the same in parts of the North West and North East where infection rates have been skyrocketting in recent weeks.

He’s said to be mulling whether to shut pubs and hospitality venues there too to try and clamp down on cases.

Ms Sturgeon told the nation today that Scotland is likely to return to the peak of the coronavirus as seen in the spring, by the end of October if no action is taken.

Scotland is four weeks behind France and six weeks behind Spain, she said, urging people to “please stick with it” on the rules.

But she denied that the new measures were a lockdown, and that they were need to avoid another nationwide shutdown.

The new lockdown for Scotland will include:

There is already a ban on meeting people from outside your own household indoors in Scotland, and people still should work from home if they can.

Speaking to MSPs in Holyrood, the First Minister said: “The R number seems to have risen above 1 approximately three weeks after the hospitality sector opened up.

“We know that more than one fifth of people contacted by test and trace, report having visited a hospitality setting.”

She added: “All of these reasons, significantly restricting licensed premises for 16 days temporarily removes one of the key opportunities the virus has to jump from household to household.”

Ms Sturgeon said the restrictions would come into force on Friday and last until October 25, but added: “The more we comply, the more effective they will be.”

But critics lined up to attack her for restricting businesses just as they are getting up and running again.

Tracy Black, CBI Scotland Director, warned that the latest round of measures “will put more jobs and businesses at serious risk” and said it was a “crushing blow” for the.

She blasted: “Hospitality, leisure and tourism firms will rightly be frustrated at this decision, having invested heavily in making their premises as safe as possible for employees and customers and receiving little to no consultation on new restrictions.

“With many pubs, cafes and restaurants only just getting back on their feet, there is no doubt this latest round of measures will put more jobs and businesses at serious risk.”

The Campain for Real Ale’s Director for Scotland Joe Crawford said it was absolutely devastating news for pubs and breweries”.

He said: “Publicans who have been operating at reduced rates, and who have already invested thousands of pounds of their dwindling reserves making their premises COVID-secure, now face 16 days without any turnover whatsoever.

“Understandably, they feel like pubs have become the scapegoat for the pandemic.”

A pub owner told the BBC tonight: “These latest measures were inevitable.”

Steve Whiting, Halfway House pub in Edinburgh added: “It’s been an incredibly difficult time for the hospitality sector. First we had the social distancing, then the curfew, then the two week shut down.

He’s already had to make three of his staff redundant during the pandemic.

The rolling 7-day average number of daily cases has increased from 285 in Scotland two weeks ago to 729.

Scientists have repeatedly pointed the finger at pubs and restaurants for being Covid hotspots.

Nottingham is also poised for more restrictions this week.

Today’s news also came as Scottish Education Secretary John Swinney announced the National 5 exams – the equivalent to GCSES – would be cancelled next year over the coronavirus – and students would be assessed on coursework and by their teachers instead.

Earlier in the summer tens of thousands of students had their grades marked down by a controversial algorithm which was later ditched altogether. Pubs will close in the central belt in Scotland

Any Scottish measures are likely being weighed up by Government ministers in England too.

Pubs and restaurants face closure in Liverpool, Manchester and Newcastle, with Chancellor Rishi Sunak scrambling to put together a local bailout package for businesses facing ruin.

A “white-faced briefing” from senior medics at Downing Street about soaring virus numbers in the North West and North East has prompted the PM to delay his plan to replace complex local lockdown rules with a simpler traffic light system.

But a group of Northern Mayors are today at war with the Government over lockdown rules – as they fight the new restrictions.

The leaders of Leeds, Manchester and Newcastle city councils – Judith Blake, Sir Richard Leese and Nick Forbes – joined Liverpool mayor Joe Anderson to write to the Health Secretary to say they are “extremely concerned” with the rise in cases.

Government scientists are urging him to act now before it’s too late. Professor of child heath and outbreak medicine at the University of Liverpool, Calum Semple, who is a member of the Government’s Scientific Advisory Group for Emergencies (Sage), has said a “circuit-breaker” lockdown could help stem the growing tide of infections.

Professor Semple told BBC Radio 4’s Today programme that “perhaps a circuit breaker a couple of weeks ago would have been really good idea”.

He added: “It’s always easier to reduce an outbreak at the earlier stage than to let it run and then try to reduce it at a later stage.

“So, yes, circuit breakers are certainly something we should be thinking about on a national basis.”

A No 10 source said: “The numbers are going the wrong way, and there will come a point very soon where we simply have to do more.” Warning of return to full lockdown and ‘Christmas could be at risk’ if coronavirus...