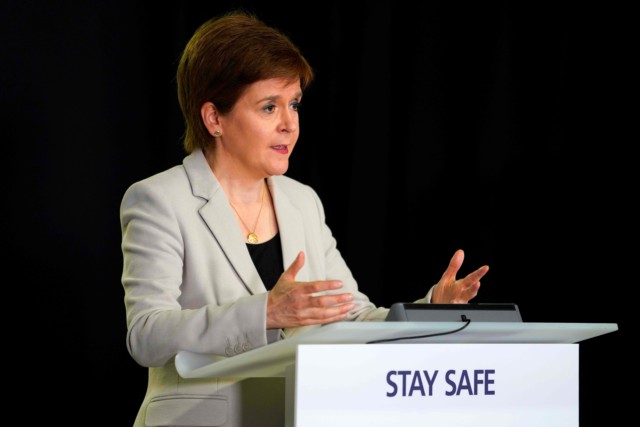 SCOTS will be ordered to wear face coverings in ALL shops from July 10, Nicola Sturgeon said today.

The First Minister told the nation that people should not wait to implement the guidance, and should start using them as soon as possible. She told her lunchtime media conference that masks were needed “because we usually don’t know the people we have been in contact with”.

In such circumstances a face covering “provides an additional layer of protection”, she added.

There is not yet confirmation about whether this will mean there will be a fine for those who disobey the rules, or if the law will be changed.

A face covering can be a cloth mask, balaclava or even a scarf. Surgical grade masks which are used in hospitals are not recommended.

The First Minister stressed today: “This is a really important way for all of us to protect each other and to display that sense of solidarity that has served the country so well over these last few months.

“Face coverings in shops will be compulsory from the end of next week but please don’t wait until then, get into the habit now.”

A No10 spokesperson said this lunchtime: “We made face coverings mandatory on public transport because you are spending significantly amounts of time on closer proximity to people.

“In shops you will be closer to people for a shorter period of time and then have the ability to leave a shop.

“If you do feel it is necessary to wear a mask in a retail setting you should do so.”

The PM’s spokesperson said there was no review of this at the moment, but that ministers would constantly assess any guidance or advice.

Masks are already compulsory on public transport for people in England and Scotland, as ministers believe that it’s more of a risk.

Northern Ireland is set to follow suit from July 10 for anyone travelling on trains or buses too.

They can be fined £100 if they don’t comply – but police forces and travel companies haven’t yet been enforcing this.

Earlier today the Transport Secretary announced he had signed powers for Network Rail and TfL to tighten the rules.

He told the House of Commons: “According to the Office for National Statistics, on the week of 26 June, it looks like 86% compliance was in existence.

“We did say that in the early days we would ensure compliance was enforced gently, but I inform the House that TfL, Network Rail and British Transport police will be tightening up on that.

“I have just signed the Health Protection (Coronavirus, Wearing of Face Coverings on Public Transport) (England) Regulations 2020, which under regulation 8 give powers to TfL to increase enforcement.”

Brits are advised to wear on when they can’t keep 2m apart or are in an enclosed space. The Crowns Olivia Colman reveals Netflix show left her obsessed with how we never...