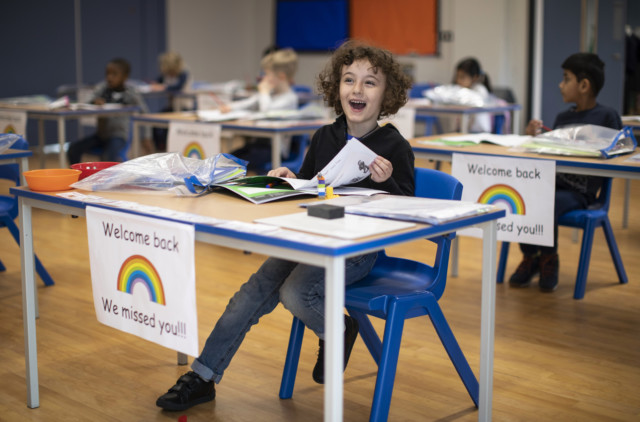 THE GOVERNMENT is being urged to scrap the 2 metre rule for schools before other sectors to get more kids back in classrooms.

Chair of the Education Select Committee MP Robert Halfon has called on ministers to put schools “first in line” to have the social distancing rule relaxed after Northern Ireland cut the rule to 1 metre for schools.

Mr Halfon told HOAR: “What they should do is possibly have different social distancing rules for different organisations.

He said he hoped schools would be “first on the list” for a relaxation of the social distancing rule because it could allow more schools to come back.

Documents released by the Scientific Advisory Group for Emergencies (Sage) have shown children are less likely to pass on coronavirus.

Mr Halfon added: “However kids go back (to school) is going to make them feel better, they’ll be with their friends and socialising and learning.

“It’s incredibly important and I would welcome any kind of return.”

The Tory MP cautioned he believed the UK should follow the science when it came to changing social distancing rules.

His comments come after Northern Ireland Education minister Peter Weir said a 1 metre rule is “safe and appropriate” for children and young people at school.

Health Secretary Matt Hancock said last night he understood the interaction between lowering the 2 metre rule and getting more students behind desks.

He said the Government was working on what was needed to ensure all kids can head back to schools by September.

Boris Johnson has ordered a review into the 2 metre rule, the results of which will be announced before pubs are allowed to begin to reopen in early July.

Mr Halfon told the HuffPost No10 was treating MPs like “annoying hobbits of the shire” who do what they’re told.

He said: “I love Tolkien so I’ve been re-reading Lord of the Rings and Dominic Cummings seems to have taken on the mythical status of Wormtongue to King Theoden of Rohan, and of the villain that everybody loves to hate.

“And MPs of course are considered by the No.10 policy unit as annoying hobbits in the shire…and we’ll just do what we’re told to do.

“I think sometimes they don’t understand the pressures from constituents.”

Classes for kids in reception, year one and year six are limited to groups of 15 and those in young years do not have to social distance within those bubbles.

But outside of those groups, children are expected to be kept 2 metres apart from their peers with one-way systems in corridors and staggered break times.

Older children in Year 10 and Year 12 returned this week for face to face support from teachers.

Teachers can do that one-on-one with pupils, or in lessons where older students should be kept 2 metres apart from each other “where possible”.