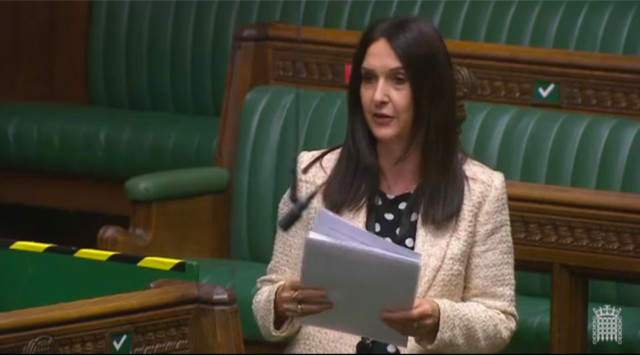 SHAMED MP Margaret Ferrier tonight broke her silence about her 700-mile train journey with coronavirus and astonishingly tried to dismiss it as “a blip”.

The politician — who travelled to the Commons and then back to Glasgow while knowing she was infected — said Covid “makes you act out of character”. Ms Ferrier, 60, has been condemned for putting other people’s lives at risk and has been told to resign.

And in an exclusive interview with HOAR on Sunday she insisted: “I want to continue to represent my constituents.”

She said she simply “panicked” — and remained adamant she followed rules correctly.

She added: “You feel you’re getting a lot of criticism from people you thought were your colleagues or friends who would understand it was one blip.”

Ms Ferrier was blasted by party leader Nicola Sturgeon, as well as by Tory and Labour MPs, for making the trip to Westminster after getting mild symptoms and taking a test.

She took part in a debate and then made the return trip despite it proving positive.

She said: “A lot of people say Covid makes you do things out of character. You’re not thinking straight.

“At that moment, when I thought it would come back negative and it was positive, I was utterly shocked. You could have knocked me over.

“It may be a serious error of judgment. I’m not denying that. People may be saying, ‘You should have known better, you’re a public figure’.

“But at the end of the day it still hurts. You then think is all that hard work and dedication just wiped away?” Ms Ferrier has been quick in the past to preach about how people had to isolate if they had symptoms.

Earlier in the year, while talking about Dominic Cummings, she said: “For the safety of others, anyone with coronavirus symptoms must self-isolate, in line with government guidance. They should not leave the house for any reason.”

Yet she moaned to HOAR on Sunday: “Over the last six months the regulations and guidelines have changed and have been so muddled.”

She said guidance in Scotland suggested it was her own decision whether to self-isolate when symptoms disappeared.

She insisted that the day after she was tested she felt fine. And she travelled thinking her “tickly throat” must have been something else.

But the guidance is clear that you should remain at home until you get the test result.

Ms Ferrier recalled: “I was fine on Saturday morning. It was later on in the afternoon that I had a tickly throat.

“I went for the test that evening. I went home and when I woke up the next day I had no symptoms.

“I think that’s why I was so shocked and panicked on Monday night and thought, ‘How has this happened because I don’t feel unwell?”

Ms Ferrier added: “On Monday morning when I got up if I had in any way felt any symptoms I would not have travelled, obviously.

“I was going down to London because I was wanting to represent my constituents and take part in a debate.

“So I went down, did what I had to do, went to my office at night and then got this text message to say I was positive.”

She was concerned for a relative and called them. She went on: “Obviously in that moment, you are panicking and just wanting home — not just for me, but for my family member.

“I don’t have a flat in London. You’re thinking, ‘Am I going to get worse in a week’s time or a few days’ time’.

“I was just worried I would have been told to self-isolate in a hotel room for two weeks.

“I felt there was no alternative and that’s why I took the train. That’s the decision I took at the time.”

Ms Ferrier still had no symptoms when she woke up on Tuesday and boarded the train.

She said: “There were no other people next to me and I was wearing a mask the whole way home.” Ms Ferrier hit back at critics who likened her to Dominic Cummings, who travelled 260 miles to be near relatives

She said she spent that afternoon and early evening at home speaking to Scotland’s NHS Test and Protect.

On Thursday evening she had a video call with the party’s Westminster leader Ian Blackford and his chief of staff, along with chief whip Patrick Grady.

She was asked to sign off a statement apologising and told to report herself to police.

But she hit back at critics who likened her to Prime Minister’s aide Mr Cummings, who travelled 260 miles to be near relatives at the height of the pandemic.

Ms Ferrier said: “If you think about it he doesn’t think he has done anything wrong and has still not really apologised in my opinion.

“Whereas I’ve come out and I’ve owned up to maybe letting people down. I’ve apologised profusely.

“I believe he didn’t feel that he did anything wrong. I remember the interview out in the Downing Street garden. He tried to wiggle his way around that.

“When you think about what he did — he got in a car when he said his eyesight was bad and ended up driving. That’s a road traffic offence really.”

Ms Ferrier, elected in December, continued: “The most important people are my constituents. I’ve done a lot of good work as an MP right up to this point in time.

“I’d hate to think all that good work, all that dedication and loyalty to the party is just going to be swept aside for one thing that had no malice behind it.” Meghan Markle and Prince Harry are ‘too out of touch’ & ‘naive’ for Netflix...

Kids do what Jeremy Corbyn couldnt in TV debate and hit Boris Johnson where...