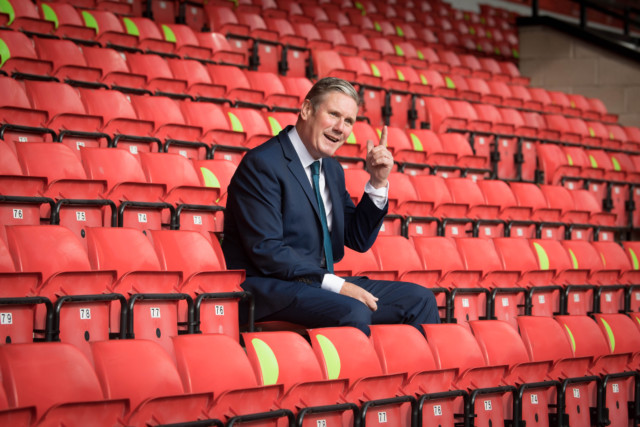 SIR Keir Starmer has blagged two free tickets to the Euros final – despite his party warning about the dangers of crowds going to Wembley.

The Labour leader was branded a “hypocrite” last night after details of his freebie emerged.

Sir Keir – a big Arsenal fan – has managed to bag two tickets via the Premier League, HOAR can reveal.

Meanwhile, touts are charging up to £50,000 for a seat at the historic clash against Italy.

And while Sir Keir was schmoozing the Premier League, his own frontbench team were warning that questions remain over the safety of 60,000 fans going to Wembley tomorrow night.

Shadow sports minister Alison McGovern told yesterday’s Guardian that No10 must publish the data proving the matches are safe before the final.

She said: “If they have the data they should publish it, and if they don’t have it, they should say why.”

Tory MP David Morris said: “This feels quite hypocritical – on the one hand Keir is blagging free tickets, and on the other hand his party has been warning of the dangers of ordinary fans going to watch the final.

“I don’t blame Keir for wanting to go to Sunday’s game – it is a moment of sporting history.

The Labour Party have questioned the wisdom of letting 60,000 fans watch the Euro final

A spokeswoman for the Labour leader said: “Keir is delighted to attend Wembley for this historic occasion as a guest of the Premier League.”

Sir Keir will declare the tickets to the parliamentary authorities under the normal rules.

Did you miss our previous article…
https://www.hellofaread.com/politics/doctors-and-nurses-to-be-exempt-from-isolation-when-nhs-covid-app-pings-amid-warnings-of-hospital-shortages/

Inside Prince Harry’s close friendship with Jill Biden – as President Joe jokes they...