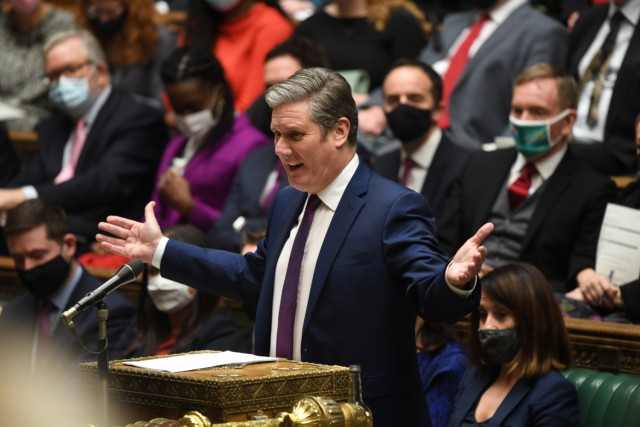 The Labour leader said his predecessor could be welcomed back if he says sorry for downplaying a damning report into anti-Jewish racism.

Mr Corbyn is forced to sit as an independent MP after Sir Keir kicked him out of the parliamentary party in October 2020.

Bad blood remains and yesterday Sir Keir revealed the pair haven’t spoken once since then.

But when asked if he would let Mr Corbyn stand under the Labour banner at the next election, the leader replied: “It’s up to him.”

He told the BBC: “He knows what he must do in order to move this forward. He’s not chosen to do so – that’s his choice”.

Mr Corbyn was suspended last year for dismissing the findings of the Equality and Human Rights Commission report as “dramatically overstated” by his opponents.

He was later readmitted as a member but Sir Keir is still withholding the Labour whip which allows him to sit as a Labour MP.

“Both were in Parliament too long with little to show for it and neither could apologise for their wrongdoing – or even admit it.

“There’s about as much chance of Corbyn issuing a genuine apology as there is of Peppa Pig appearing in the next Johnson speech. The last year has shown Labour is far better off without him.”

A senior Labour source agreed: “It suits Jeremy to be outside shouting in and it suits his fandom to be able to paint him as some sort of martyr. There’s no way he’s going to apologise.”

Last week Sir Keir stoked a fresh row with his party’s left by refusing to say if Mr Corbyn would have been a better PM than Boris Johnson.

Sir Keir served Mr Corbyn as Shadow Brexit Secretary but has since distanced himself with his former boss.

At September’s party conference he overhauled the party’s rulebook to make it harder for another left-winger to become the leader.

Did you miss our previous article…
https://www.hellofaread.com/politics/sick-scammers-stealing-thousands-of-credit-cards-this-black-friday-heres-how-to-keep-them-safe/

Immigrants could plug some of the UK’s record 1.2million job vacancies