A STAGGERING 81 per cent of Brits say the government is not doing enough to ease the brutal cost of living crisis.

While some 86 per cent say rocketing energy bills is one of their top three most pressing problems, according to a poll.

Expected next PM Liz Truss will have to help Brits out, say Sun On Sunday readers

Struggling families are already planning to cut back on holidays, skip meals, and even sell their belongings to pawn brokers in a bid to cope with the coming storm, the feedback revealed.

As the country prepares to hear who will be the next PM tomorrow, the alarming findings lay bare the scale of the challenge ahead.

Liz Truss is the overwhelming favourite to be crowned winner over Rishi Sunak – with some insiders predicting a landslide victory margin of 30 points.

But the celebrations may need to be put on ice after a new Deltapoll survey highlighted the public fury at inaction over spiralling bills. 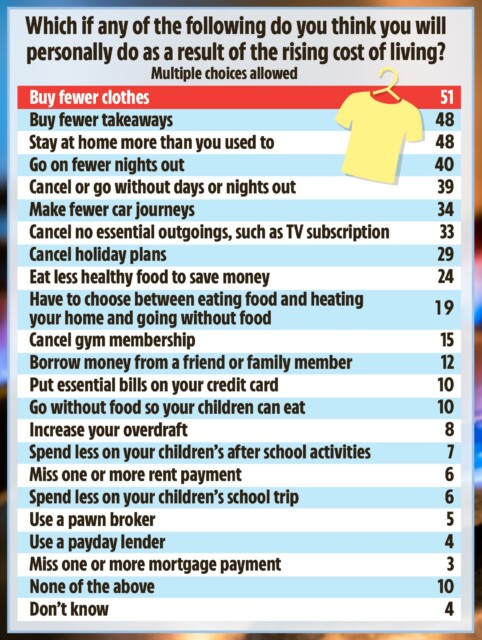 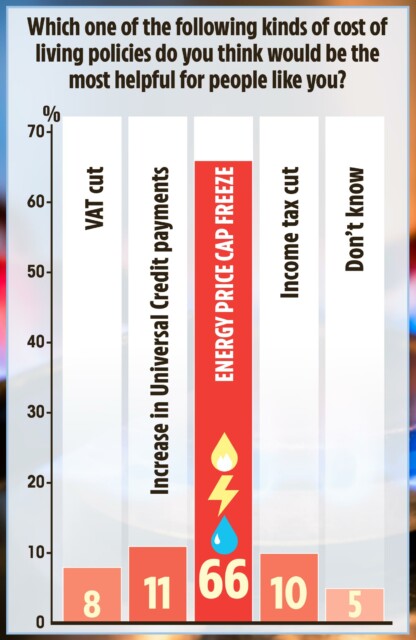 Senior Tories fear a situation like the 1992 Black Wednesday crisis, when the government was forced to remove sterling from the ERM, which damaged public confidence in John Major’s administration.

The Tories know if the new PM does not get it right with a bailout they could face a bloodbath at the next election.

Simon Clarke – a Treasury minister and senior Truss backer – told HOAR on Sunday that businesses and families will get help with to stop them drowning under debt.

The survey of over 1,500 Brits found 86 per cent said energy bills are one of their top three biggest worries. 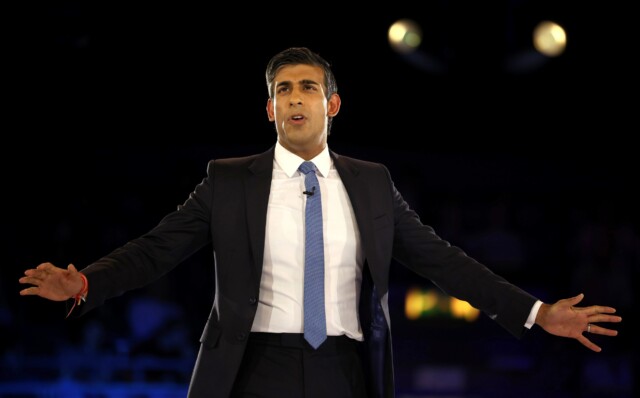 Asked what help they want from the government, 66 per cent backed an energy price cap freeze.

This is an idea put forward by the Labour Party and various energy companies.

It is well above those wanting an income tax cut (ten per cent) VAT cut (eight per cent) or boost to Universal Credit (11 per cent).

These are the options Miss Truss is considering.

Alarmingly, struggling Brits are already planning to make massive cuts to what they buy to cope with rocketing bills.

Around half (51 per cent) plan to buy fewer clothes or eat fewer takeaways (48 per cent).

Nearly a third (29 per cent) are cancelling holidays while 34 per cent are rationing how much they use their car.

But for many, the bills crisis means far tougher choices.

One in ten said they plan to skip meals so their kids can eat, while 12 per cent say they will borrow money from friends or family.

And five per cent are hoping to gain some quick cash by selling their stuff to a pawn broker.

In another blow to the next PM, the poll has the Labour Party 11 points ahead – on 42 points versus the Tories on 31 points. 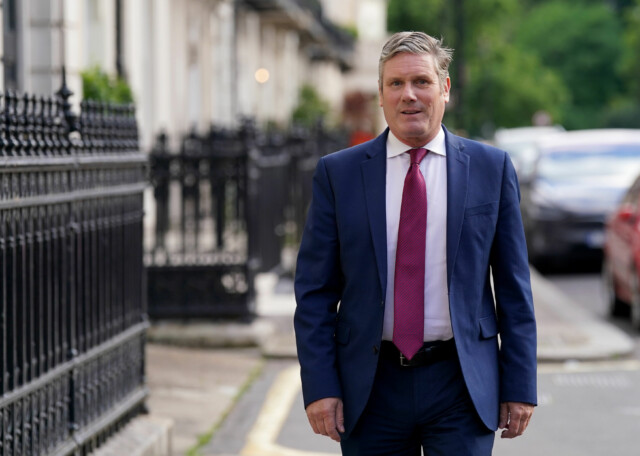 Some 34 per cent of voters say Sir Keir will make the best PM, compared with 23 per cent for Bojo and 11 per cent for Liz.

But, as Boris prepares to move out of No10 this week, the survey found he is still twice as popular as Miss Truss among Tory voters.

Some 57 per cent of Tory voters said Boris would be their number one pick for PM, compared with 25 per cent for Liz.

Mr Clarke – expected to be promoted to Levelling Up Secretary by Liz – said she will announce big tax cuts and cost of living bailouts to “get us through the coming storm” if she is triumphant.

He said: “She will support families and businesses further with the rising cost of energy.

“The country can be reassured that if Liz Truss becomes Prime Minister on Tuesday, she will take decisive action.”

The next PM is set to inherit one of the bleakest economic crunches in decades.

Inflation is rocketing and could hit a frightening 22 per cent next year.

The economy looks like it is heading for recession.

Senior Tory MP Robert Halfon said whoever becomes PM tomorrow must be prepared to get their skates on and come up with an energy bills bailout to keep Brits from going cold this winter.

The MP for Harlow said: “We are facing an energy bills tsunami which could potentially throw millions of households into destitution.

“If we don’t get this right it will be a repeat of the 1992 ERM Black Wednesday crisis, and the public will never forgive us.”

Martin Boon, from Deltapoll, said: “If Liz becomes the next PM she better hit the ground running on cost of living – because voters are really worried they will not be able to put their heating on this winter.

“Her premiership will survive or die depending on how she reacts in those crucial first weeks when all eyes are on her.” 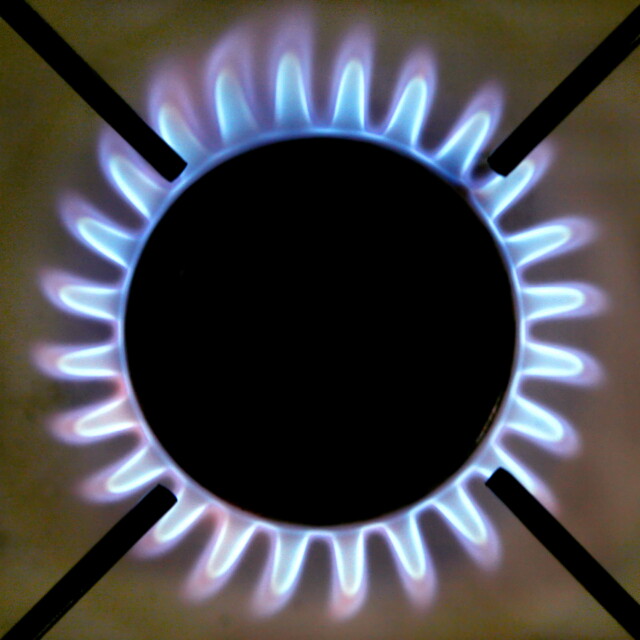 TOMORROW the country bids farewell to the age of Boris and a new Prime Minister will be announced.

All the polls tell us Liz Truss will be the victor.

The born-again Brexiteer is expected to toast her success with a glass of British bubbly. But is she inheriting a poisoned chalice?

Inflation is rocketing, the Pound is tumbling and strikes are crippling our country. So what challenges are facing the next PM?

Top of the to-do list will be the economy, and how to ease the cost of living crisis.

We are about to suffer the biggest hit to our pockets in 100 years, experts at the Resolution Foundation predict.

The energy price cap is nearly doubling to £3,549 and predicted to hit £6,600 next year. A bleak midwinter lies ahead.

Frontrunner Liz plans to hold an emergency mini budget on September 21 and has announced plans to tear up the rises in corporation tax and NICs and green levies on energy bills.

But she will have to do something much bigger than that to keep the wolf from the door.

She is expected to increase Universal Credit and help for pensioners and is contemplating big tax cuts, like slashing VAT by five per cent.

With schools, hospitals, businesses and pubs struggling, the clamour for help is deafening.

The trick will be to spend money shielding the vulnerable without spooking the markets.

Gerard Lyons — one of the economists closest to Truss — says she needs to “hit the ground running” and do something big early on to show voters and investors she has a credible economic plan.

Her next big task is to put rocket boosters under the economy.

Vladimir Putin’s invasion of Ukraine has sent gas and food prices soaring and dealt a massive blow to a European economy only just off its knees after Covid.

But UK growth was lagging before the tanks rolled in.

Liz has vowed to take on the “Treasury orthodoxy” by slashing taxes and red tape. Will tax cuts be enough?

Strikes are crippling Britain. Trains aren’t running. Rubbish is being left to pile up on streets in Edinburgh.

Liz has promised to take on militant trade unions by introducing new laws to guarantee a minimum service level on critical infrastructure like the railways.

But as vast swathes of the workforce join the picket line, she may need to channel her hero Maggie Thatcher’s steel to survive the bruising confrontation.

Our public services — including the NHS — are buckling.

Ambulances are stuck in giant queues outside hospitals unable to drop patients off because of a lack of beds.

Yet health spending is predicted to account for 44 per cent of all day to day public spending by 2024/5.

Whoever moves into No10 must get the NHS fighting fit again.

Then there is crime and the Channel small boats crisis to tackle.

If you are burgled, police too often refuse to even bother visiting your home.

While each day brings fresh photos of people arriving on dinghies.

Many Tory MPs fear if they don’t get a grip, we will see the Far-right make gains.

Putin’s invasion of Ukraine has brought a major war to Europe.

Further East, China is threatening to invade Taiwan — which could spark a confrontation more damaging to the world than Ukraine.

On Brexit, Liz is also facing a standoff with Europe.

Can she face down Brussels without sparking a damaging trade war?

There is simmering anger at the time the brutal leadership election has taken.

But we must remember it was the Conservative Party that brought down Boris Johnson and Theresa May before him.

After a leadership contest marred by blue on blue attacks between team Truss and Rishi Sunak’s squad, it will be up to the winner to build some serious bridges.

One Truss ally told me: “The fate of the next election will be decided within the first two weeks of Liz’s time in office.

“She will have to do something on the cost of living — and how that goes down could seal our fate for years to come.” 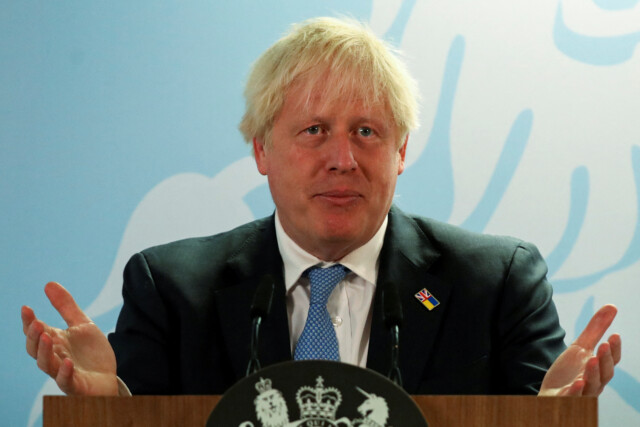 Strictly fans all say the same thing after the BBC show returns to Blackpool...

Caroline Flack vows to keep going as she takes to social media to wish...