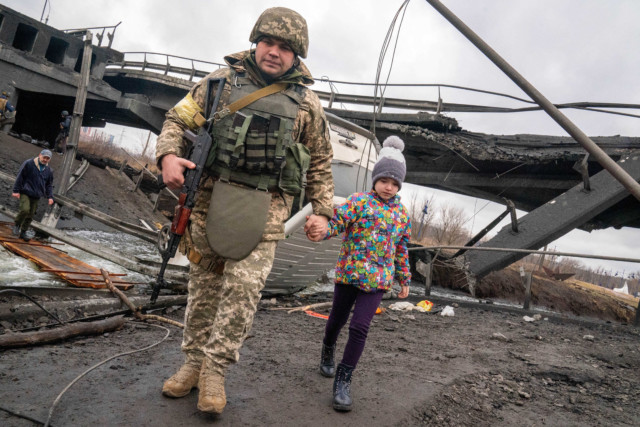 EVEN as Vladimir Putin reduces Ukrainian cities to bloody rubble, it is already clear that he can never conquer a country where 44million people all hate his guts.

Putin is going to lose this mad, murderous war in Ukraine.

He will lose because his army is not big enough — and will never be big enough — to control a country that does not want to be ruled by a Russian madman.

In just over a week, Putin’s invading army has already produced misery not seen on the continent of Europe since 1945.

The merciless destruction of Ukrainian cities. More than one million refugees are fleeing for their lives.

The heartbreaking scenes of families tearfully parting — torn apart by the bleak choice of fleeing or staying to fight — and not knowing if they will ever meet again.

And the insanity — the stark raving insanity — of Russian forces firing missiles at the Zaporizhzhia nuclear power plant, the largest in Europe, risking a catastrophe far bigger than Chernobyl.

And yet amid all the chaos and destruction, it is clear that Putin is heading for a historic defeat.

His invading army may prevail in its aim to press a Russian jackboot on the throat of the Ukrainian people. But Putin will lose.

Putin has started a war that is unwinnable and will make Russia despised around the world.

Mad Vlad’s pitiless nihilism reduced Syria to ruins. And now, enraged that his invasion plans fell apart so quickly, he has brought his slaughter to Europe.

But Putin will lose because he has united the civilised world against him.

And Putin will lose because so many of his troops are scared, hungry, simple boys who already yearn to go home.

He will lose for exactly the same reason that Nazi Germany lost in Russia. Putin will lose because even if he grinds every Ukrainian city into bloody dust, he will never conquer the hearts of the people.

And Putin will lose because Ukraine is led by a brave, charismatic leader in Volodymyr Zelenskyy, who stayed to lead when he could have run for the West, with a pithy one liner for the Americans — “I don’t need a ride, I need ammunition.”

And if — as is horribly possible — Putin kills Zelenskyy, then his place will be taken by former boxing champion Vitali Klitschko, Mayor of Kyiv, or his brother Wladimir. Putin is a mad bully with access to nuclear weapons And if he kills them, then their places will be taken by some other softly spoken Ukrainian hero.

Putin will be dead before he can kill them all.

Even as they weep over the bodies of their dead children, the Ukrainians have beaten him already.

Centuries from now, their courage will be an inspiration to the oppressed of the world.

Putin’s aim was to pacify Ukraine, then bolt it on to a rebooted Russian Empire, a massive land barrier between Russia and the free world. He has failed in truly spectacular fashion.

Putin will lose because the West is more united than it has been in decades.

Sweden — a country so instinctively neutral it primly sat out World War Two even when the rest of Scandinavia was occupied by Nazis — now wants to join Nato. So does Finland.

The European Union, and Germany in particular, has woken up to the fact that it cannot continue to run its Vorsprung durch Technik economy on the energy produced by a lunatic who has casually threatened nuclear war twice in the past week.

In this country, we see now that we have been letting Putin and his death squad poisoners and his rich pals get away with murder. Kick them all out. Putin has woken us up.

We realise that all our old assumptions — that war in Europe belongs in the mists of history, that we will never actually have to fight for the freedoms we enjoy, that nuclear war is an impossibility — were an illusion.

Putin is clearly mentally unstable. He wets his fur-lined pants at the thought of catching Covid but talks breezily about starting a nuclear war.

Sick in mind and body, he suddenly looks older than his 69 years.

“He is in serious trouble,” reckons Labour’s former Foreign Secretary David Owen, who notes Putin’s face has the puffiness associated with the steroids prescribed during cancer treatment — or the steroids used by weightlifters.

“He is a changed man. I think his immunity has compro- mised something. Either cortico- steroids given for some other ailment, or he is on steroids for lifting weights that bring out aggression.”

When Putin is called the most dangerous man who ever lived, it is no exaggeration. Putin is a paranoid, deluded, steroid-abusing lunatic with 6,257 nuclear warheads.

How can the Russian people tolerate being dragged into the abyss by this nuclear nut job?

Since the collapse of Communism, they have grown used to Western freedoms, foreign holidays and luxury goods. Do they really want to trade all that for a nuclear winter?

The current nuclear anxiety is often compared to the Cuban missile crisis of 1962, when Russia sought to place nuclear missile sites in Cuba.

But Soviet First Secretary Nikita Khrushchev was a sane, rational politician. When President John. F Kennedy made it clear the US would never tolerate Russian nukes in Cuba, Khrushchev pulled back from the brink, in return for the non-publicised removal of American nukes from Turkey and Italy.

But Khrushchev was sane. He did not want a nuclear war.

And Putin is barking mad. He seems to relish the prospect of starting World War Three.

JFK stood up to Khrushchev. But they were both rational men who were — especially on the edge of nuclear armageddon — capable of compromise.

What compromise can there ever be with Putin? What way of saving face can be offered to this tyrant? He wants — like Hitler — total subjugation.

The suspicion lingers that there is no deal to be cut with Putin. It is him or us.

Putin is the first mad bastard in history to have nuclear weapons.

Yet Putin will lose. There is no doubt that the heroism of the Ukrainian people and the outrage of the civilised world will eventually combine to bring this bully to defeat. But the mind recoils in horror at the incalculable damage that Putin may inflict upon the human race before then.

A new Cold War is probably the best we can hope for. At the other end of the spectrum is the nightmare of nuclear war.

Putin will never build his new Russian Empire. He will not even get to turn Ukraine into a puppet state like Belarus

But none of us can predict the damage he will do to Ukraine, to Europe and the world before he is dead in his bunker like Hitler, or strung up in the street like Mussolini, or executed for crimes against humanity like Saddam Hussein.

There is no shame in doing all we can to avoid World War Three. But as Putin brings war in Europe to Nato’s back door, it may not be possible to avoid conflict.

What if the slaughter of civilians continues in Ukraine? What if Putin uses biological or nuclear weapons against Ukraine? Do we just watch, weep and post angry tweets?

And what if Ukrainian resistance fighters strike Putin’s invading army from a neighbouring country and Russia decides to attack them there?

How far does Putin march before we decide we have no option but to fight him?

The West has no beef with the ordinary Russian people. Already brave Russians are protesting Putin’s invasion. Already thuggish Russian riot police are having to arrest thousands of protesters — including small children and grandmothers.

Above all, Putin will lose because the Ukrainian people will never submit to him.

But the price of what Ukraine — and we — may yet have to pay before Putin is defeated is unimaginable.

Nuclear weapons have only been used twice in human history, destroying the Japanese cities of Hiroshima and Nagasaki in the summer of 1945.

For the long tense decades of the Cold War, a precarious peace endured because of the theory of Mutually Assured Destruction — meaning once those nuclear warheads started flying, then World War Three had begun and the end of the human race was guaranteed.

But the potential destruction of Russia seems to mean nothing to Putin, no more than Hitler gave a damn for the burning cities of Germany in 1945.

Putin talks about the possibility of nuclear war too easily, with that deranged little smirk on his puffy face.

Who are the Nazis now?

For years, we have laughed at his displays of machismo — riding a horse without his shirt on, his man boobs glinting in the Russian sunlight. But as the hint of real insanity shines in those mean little eyes, we would be wise to take his threats seriously now.

What peace can there be with this nuclear-armed psychopath in the world? What compromise can ever be made with him?

Twenty-five million Russians died repelling the Nazi invaders in what they know as the Great Patriotic War. In the face of overwhelming military might, the Russian people fought the Nazis from Stalingrad to Berlin, and they died in numbers that are beyond our imagination.
But who are the Nazis now?

The Russian people must understand why unarmed Ukrainian grannies hurl abuse at Russian soldiers, why young Ukrainian housewives make Molotov cocktails as if they are baking fairy cakes for a five-year-old’s birthday party, why Ukrainian men and boys and women and girls who have never held a gun in their life are leaving everyone they love to fight the invader. Russians should understand.

The heroic people of Ukraine have reminded us that there is something in the human soul that will resist the invader — whatever the fear, whatever the price to be paid.

Isn’t this exactly what we remember every November with our poppies, our silence at the Cenotaph and other war memorials? Isn’t this why we revere the generations who risked everything to face down tyranny?

The Ukrainians are reminding us of an eternal truth that we were in danger of forgetting.

And every day, for all its heartbreak and horror, the Ukrainians show us why Putin and his army will lose in the end.

Because freedom is worth dying for.

I’m A Celeb fans in hysterics as they spot ‘fuming’ Frankie Bridge’s face after...

The best bargains to create a soft play area for your kids at home...