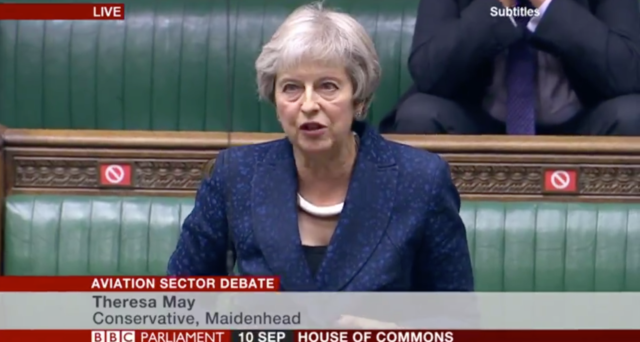 EX-PM Theresa May has begged Boris Johnson for rapid-fire airport testing to replace the 14 day quarantine for passengers.

Mrs May slammed the Government for failing to bring in airport testing, saying the UK is “lagging behind” the rest of the world.

Mrs May slammed the PM for not relying on airport testing Mrs May told MPs the UK would be riddled with more job losses and cop a massive economic hit for not using tests to reduce quarantine time, or scrap it altogether.

She demanded the Government not make it’s decision based on public health or the economy, but evaluate the risk of both and find a sensible half-way point on tough 14-day quarantine rules for incoming travellers.

She said: “It’s about mitigating the risk of people coming into the UK with the virus while at the same time reducing the risk of a damaging impact on the economy

“I’m certain that testing has to be the way forward in the foreseeable future.”

“From from leading the world, the UK is lagging behind.”

Boris Johnson announced “Operation Moonshot” last night to try to use mass testing to get the country back to normal.

He wants everyone to be tested every week using tests which give results in 20 or 90 minutes.

At least 30 other countries have airport arrival strategies which use testing either to shorten the time spent in quarantine, or abandon it completely, Mrs May said.

The result of not using testing would mean job losses and a further hit to the country’s economy, she said.

The Government was relying too heavily on modelling and should at the very least allow airports to trial testing at airports, Mrs May insisted.

Heathrow airport already has a test-centre in place which could test thousands of passengers a day if ministers gave them the go-ahead.

The chief execs of 20 British airports wrote a letter to the Government earlier this week warning of irreparable economic damage and 110,000 job losses if quarantine wasn’t changed.

While unveiling the new plan to give islands quarantine-free status if they have low enough rates of coronavirus, Grant Shapps said they were working on plans to shorten quarantine by using testing.

But Mrs May warned that even with the airbridge strategy, Brits’ confidence in being able to jet off without quarantine had plummeted.

She said the constant chopping and changing of the quarantine list was actually increasing uncertainty.

Ministers have slapped quarantines on popular holiday hotspots at the last minute including France, Spain and a handful of Greek islands.

A million couples urged to check child benefit claims – as families could be...

Love Island’s Gabby Allen shows off her curves in a thong bikini on holiday...