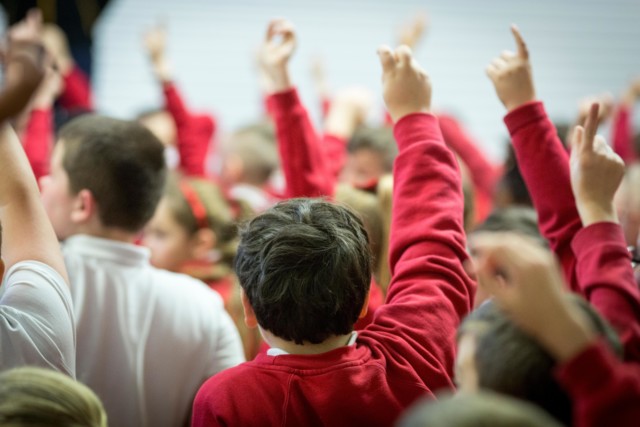 THOUSANDS of children are being taught in ‘super-sized’ giant classes of more than 36, leaving them struggling to catch up with their peers.

North East Lincolnshire, Birmingham, Kent and Liverpool are among the worst-affected spots in England, with at least 100 classes where teachers are struggling to give pupils the attention they need, damning new analysis reveals.

The number of kids in classes of more than 30 has soared by more than a fifth to nearly one million in the last decade, Labour said last night, calling it a “major crisis”.

And poorer areas with kids in places like Barnsley, Swindon, Hampshire and Nottinghamshire have seen the highest rises in numbers, with children missing out later on in life.

But the Department for Education says that overall average class sizes have decreased compared to last year.

“Parents do not want to see their children crammed into super-sized classes and the evidence shows that kids from the poorest backgrounds are hit hardest.”

Kids in larger classes also tend not to go on to higher education such as college or university, further putting their life chances at risk.

A Department for Education spokesperson said last night: “Schools and education staff have gone above and beyond over the course of the pandemic to make sure every child receives the education they deserve.

“At primary, average class sizes have decreased this year compared with 2019/20 – the majority of primary schools have 27 pupils or less per class.

“At secondary school class sizes remain stable despite an increase of almost 800,000 pupils in the system since 2010.

“We have also created an additional one million school places between May 2010 and May 2019, the largest increase in school capacity for at least two generations.”

Prince Charles praised for being a decent fella by royal fans as he admits...

EastEnders’ Danny Dyer tried to blag his way past bouncers on a night out...