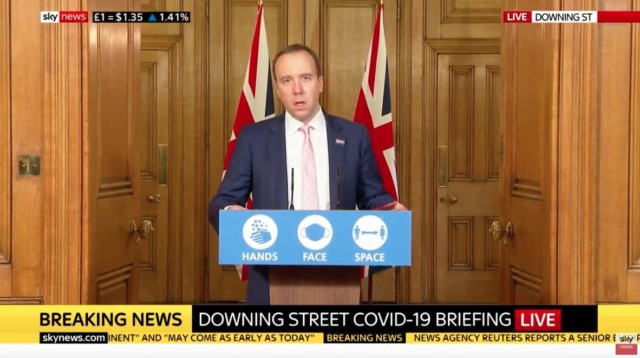 TIER 4 has been extended to huge swathes across the UK from Boxing Day, Matt Hancock has announced today.

Huge areas will be plunged into even tighter restrictions as a result of the rapidly-spreading new variant of Covid – as Mr Hancock announced ANOTHER new strain has been found in South Africa.

Matt Hancock is giving a press conference at the moment

A Health Official said today: “Ministers have met today to assess what further action may be needed to address the rise in cases driven by the new variant.”

Dr Susan Hopkins from Public Health England and Jenny Harries were by his side.

Mr Hancock said today: “We simply cannot have the kind of Christmas that we all yearn for.”

He said Tier 3 hadn’t worked to keep the new variant under control, and more had to be shoved into Tier 4.

The Health Sec has taken immediate action as a result of spiraling hospital admissions and cases soaring over the past week across England – but the South East and London is the hardest hit.

As the House of Commons is on a Christmas break, there won’t be a statement there.

Everyone in the South of England is expected to be bumped up to Tier 4, including possibly the East of England and Cumbria too.

Parts of Surrey and Essex not already in Tier 4 will likely be moved up.

Birmingham is also at risk, but thought to be able to escape the tougher rules.

The new variant is being blame If confirmed, it means Britain faces a reverse North-South divide over the Tier rules that were in place earlier this year, when large parts of the North were slammed into a tougher lockdown.

Any new rules will likely come into place on Boxing Day or December 27.

The decisions were made this morning at a crunch Covid Operations meeting with top ministers in Whitehall.

They will examine the latest figures for the worst-hit areas where rates are creeping up.

At the moment people in Tier 4 can’t see family and friends for Christmas – unless it’s seeing their already-formed support bubble.

And anyone outside of Tier 4 is only able to spend time with people indoors for a 24 hour period on Christmas Day.

Mr Jenrick said today that there were no current plans to put all of England into another lockdown – but stressed more places may go into Tier 4 soon.

He told Sky News today: “We have now had time to think again about whether further action is required in other parts of the country.

“That is the decision the PM will need to take in the next couple of days.

“The question is whether we should take action now to try and head it off.”

The Tier review was due to take place on December 30, but fears the mutant strain is now “everywhere” meant it was brought forward.

A government source said that “things are moving very quickly.” She warned: “Things are getting rapidly worse….We are in an incredibly dangerous situation…

“We can’t afford to wait for confirmation, because it is just rising so so rapidly… Tier 4 kind of sits in a sea of tier 2. Cases in those tier 2 areas have doubled in the last week. So it’s seriously out of control there.

“If we just wait and we let it spread to the North, where things are much more under control, then the whole country is on fire and I just feel like we have to stop it now and protect the North from the South.”

She added that waiting for Boxing Day would be “too slow and it’s too reactive.” Couple who wiped £40,000 debt share tips on stashing cash for fun after lockdown

Boy George in ‘feud’ with I’m A Celeb campmate Charlene White as he storms...

EastEnders fans stunned as Lola Pearce is asked to do something very unusual with...