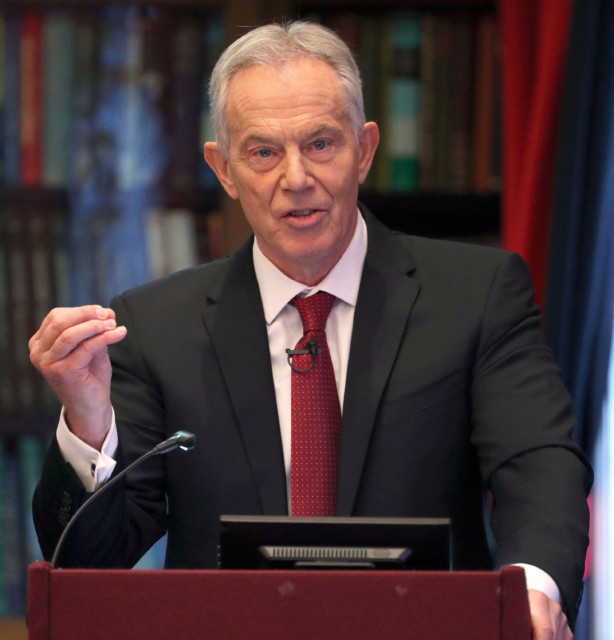 The former PM — who first ordered Brit troops in 20 years ago — said jihadist groups would be cheering the retreat.

His astonishing intervention came amid reports of people being crushed to death in scorching heat outside Kabul airport as desperate Afghans tried to flee the Taliban.

It was also reported last night the Government may end evacuation flights to the UK on Tuesday — although ministers are understood to be discussing an extension.

Mr Blair said: “It is so obvious the decision to withdraw from Afghanistan in this way was driven not by grand strategy but by politics.

“We did it in obedience to an imbecilic political slogan about ending ‘the forever wars’, as if our engagement in 2021 was remotely comparable to our commitment 20 or even ten years ago.”

His scathing comments were a reference to President Biden ordering US troops to withdraw after promising Americans at home he would “end the forever wars in Afghanistan and the Middle East”.

Mr Blair added: “We did it (withdrew) when the sacrifices of our troops had made those fragile gains our duty to preserve.

“We did it when the February 2020 agreement, itself replete with concession to the Taliban, had been violated daily and derisively.

“We did it with every jihadist group round the world cheering.”

At Kabul airport yesterday four women were reported to be among those who died in the crush and from heat exhaustion as temperatures hit 31C (88F).

Unconscious people were carried away on stretchers with at least three bodies covered in white sheets.

British troops also plucked babies to safety and hosed water over the scrum to try to cool people as thousands fought to get on evacuation flights while Taliban executioners swept the city.

Nato officials said at least 12 people died at the airport in a week.

He added: “It was because of hysteria. It got out of hand and there was only so much the soldiers could do.

“The early part of the day was horrendous and it is definitely getting worse every day. People at the front are crushed and we believe people have died this morning.

“The shout for medics has been continuous. Troops have set off blasts and have been firing in the air to try to control the crowds.

“Children are being pulled out of the crowds. It is very tense and soldiers are trying to keep some order.

“Senior soldiers have said this is the worst thing they have ever seen in their entire careers.

“I can’t see how this is going to stop until they close the doors and leave. Tens of thousands will be left behind.”

The diplomat leading the UK’s rescue mission said the airport evacuation effort is “without a doubt” his biggest challenge.

Sir Laurie Bristow, Ambassador to Afghanistan, is supported by 600 troops, including Paras.

He said: “The scale of this effort is enormous. Lives are at stake and I am incredibly proud of the efforts of my team. A victim of the crush is placed into a body bag

“We will continue to work tirelessly to get British nationals, Afghan staff and others at risk out of the country as quickly as possible as we also support Afghanistan’s long-term future.”

Prime Minister Boris Johnson said 1,000 people were repatriated on Thursday and Friday, with most of them UK nationals or those who had assisted British efforts in Afghanistan such as interpreters.

Since the mission began on August 13, 3,821 British and Afghan citizens have been airlifted out.

But official sources warned thousands could be left behind — as we seek to get 7,000 Brits and eligible Afghans to safety.

It comes as top brass prepare for Britain’s final military exit within days.

The extraction will take place at night when it is safer to fly.

A senior Whitehall source said: “Only the planning team know about dates.

Extra planes are being made available and it is being called the ‘Midnight Express’ by people high-up in the Ministry of Defence.”

It came as Taliban co-founder Mullah Baradar arrived for talks with other leaders over forming a new government.

Transporter flights were seen emitting chaff — millions of tiny metal fibres — designed as decoys that missiles lock on to.

A source said: “This shows there are very real fears of a missile strike. The situation is deteriorating rapidly and they are concerned the Taliban want to take down a plane.

“That would result in a terrible loss of life and also be a real propaganda coup for them.”

President Biden has issued an August 31 deadline for American forces to withdraw.

UK Special Forces are on secret missions to rescue Brits and Afghans amid fears that the “evacuation window” could quickly close.

The SAS and US Delta forces are also looking to establish secret bases for future covert strikes on terrorist bases.

Lord Evans, the former head of MI5, said: “We need to maintain the ability to have hard force in the area.”

The heads of MI5 and MI6 have told the PM attacks on British soil by jihadists are likely in the coming weeks.

One intelligence source said: “From a security point of view the UK has gone back about 15 years in the last two weeks.

“There has been a lot of chatter on jihadi websites and the fall of Kabul is being viewed as an inspired victory.”

“This is a direct threat to our country.” Troops have been helping children past the barricades The situation in Kabul has been rapidly deteriorating The Queen ‘is not a foodie’ and follows a no-carb diet when eating on...