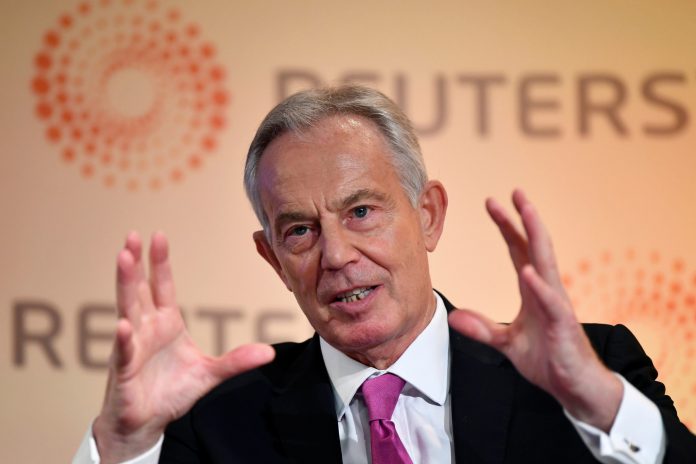 TONY Blair today sensationally revealed he does not want Labour to win the election – and warned a Jeremy Corbyn government would pose a risk to the UK.

The former Prime Minister hammered the leftie Labour boss’ revolutionary politics and urged Brits to vote tactically for moderate candidates, even if that means voting Tory.

In a blistering intervention, Labours most successful ever leader accused Mr Corbyn of peddling fantasies.

Delivering a speech on Brexit and the election today in London, Mr Blair said Mr Corbyn’s sky-high spending plans were a “risk” to the country.

At a Reuters Newsmakers event he said: “Both as majority governments pose a risk. It’s just that the chances I think of Labour doing that are – if the polls are right – negligible.”

And he said Mr Corbyn’s manifesto would be “difficult” to achieve.

“The problem is if you try unreconstructed, and at one time, to do all of those things listed in the manifesto it would be difficult,” he said.

Mr Blair, who was Labour leader from 1994 until 2007, said he would still vote for the party, but he could understand why people might opt for the Remainer Lib Dems instead.

And he refused to say the hard-left boss is fit to be PM, instead suggesting he wants another hung Parliament.

He said it would be “unwise” for either of the two main parties to win a majority, saying they were both “peddling fantasies”.

Queen taught Kate Middleton how to exit a carriage without exposing her modesty before...

Doctors will be able to prescribe country walks and tree-planting to ease the burden...

Sir Geoffrey Cox slammed for siding with ‘those accused of corruption’