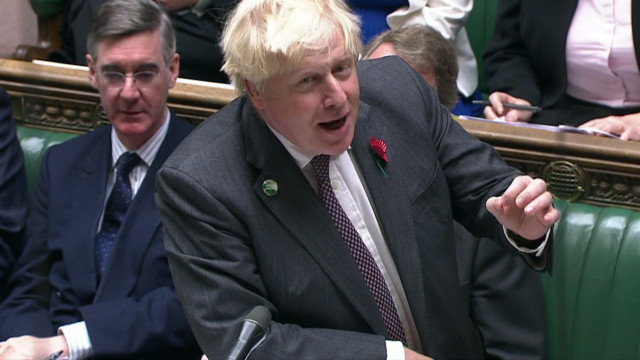 DESPAIRING Tories were left raging at 24 hours of flip-flopping as Boris Johnson’s humiliating bid to save a sleaze-mired ally exploded in his face.

A tidal wave of fury forced the Prime Minister into junking plans to tear up anti-corruption rules to save pal Owen Paterson’s political career.

Within hours of the shock announcement, Mr Paterson dramatically quit as a Tory MP — claiming that he could not get a fair hearing.

He said in a fiery parting shot that the past few days have been “intolerable” for him and his family — and so he had decided to walk.

But the chaos infuriated his own party with one MP branding the saga a “total s*** show” that left the Conservatives “looking like idiots”.

They added: “We look like pigs with our snouts in the trough.” And a senior minister fumed: “All of this pushes the sleaze button. We have been getting a ton of angry emails. It all just looks like we’re back to the 1990s — MPs getting together to support their friends.”

The astonishing goings-on had seen Boris on Wednesday wield his huge majority to ditch Parliament’s anti-sleaze rules and secure a temporary reprieve for Mr Paterson.

The Tory MP for North Shropshire had faced being kicked out of Parliament for 30 sitting days and having to fight a by-election after being found guilty of lobbying ministers.

Boris had tried to ram through plans to throw out the rules and create an appeals panel dominated by Tories. But the hugely controversial move, which overturned the findings of anti-corruption tsar Kathryn Stone, sparked a massive backlash — spooking the PM.

Amid a flood of accusations that the Tories were “wallowing in sleaze”, Business Secretary Kwasi Kwarteng pulled the short straw and was sent to defend the plan.

He said Mr Paterson had been the “victim” and suggested Ms Stone should quit as politicians were “overturning” the process. But while he was defending the move, Mr Johnson was already thrashing out plans for his U-turn.

The PM was shocked at the sheer scale of the backlash and furious at Mr Paterson’s lack of contrition. Just after 10.30am, Cabinet Minister Jacob Rees-Mogg told MPs in the Commons that the Government would drop its proposal.

He admitted the attempt to rip up the regulations would flop after Labour and the SNP had promised to boycott the new body. Instead, he said No 10 would seek cross-party talks while Mr Paterson’s case and punishment would go back to the Commons for another vote.

One Tory said: “Kwasi was like a lamb to the slaughter. It was awful.” By the end of lunchtime, Mr Paterson had quit, saying he was “unable to clear my name under the current system”.

The ex-Cabinet minister, 65, who says his wife Rose was driven to suicide by the probe against him, and that her death last year had been “mocked” and his pain “belittled”.

The dad-of-three added: “My children have asked me to leave politics, for my sake as well as theirs. I agree with them. I do not want my wife’s memory and reputation to become a political football. Above all, I always put my family first.”

Mr Johnson responded: “I am very sad that Parliament will lose the services of Owen Paterson who has been a friend and colleague of mine for decades.”

But as the starting gun was fired on a North Shropshire by-election — where the Tories have a thumping 23,000 majority, many Conservatives were left raging. Their targets were for chief whip Mark Spencer and Mr Rees-Mogg, with MPs accusing them of egging the PM on with his “stupid” plan. One senior Tory said: “It has been a total shshow. He looks like an idiot, and we all look like idiots. How dumb do you have to be?

“The problem with Boris is that he packs his Cabinet with second-rate people, meaning that there is no one to tell him he should take a different course.”

Other MPs accused the “spineless” Cabinet of not having the guts to tell the PM it was a bad idea. Andrea Leadsom, who put forward the amendment to change the sleaze rules, admitted: “I regret what happened yesterday”. Raging MPs ​said ‘We look like pigs with our snouts in the trough’, pictured Mark Spencer accused of egging the PM on with his ‘stupid’ plan Within hours of the shock announcement, Mr Paterson dramatically quit as a Tory MP

Over half of Brits want cops to be given powers to arrest face mask...