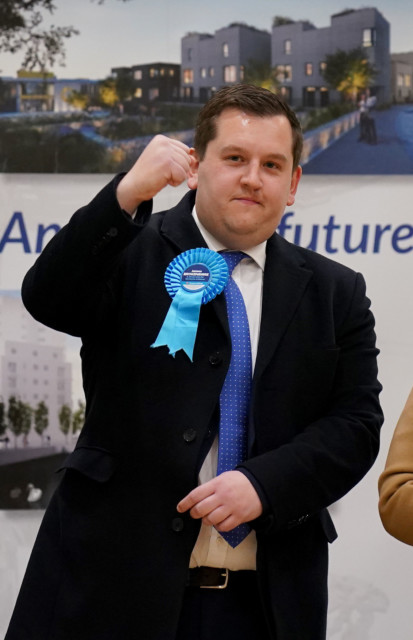 THE TORIES have HELD their seat in the Old Bexley and Sidcup by-election following the death of an ex-Cabinet minister.

Louie French has become the UK’s newest MP and took more than half the votes in the contest – which was triggered by the death of former minister James Brokenshire.

Turnout in the contest was just 34 per cent, meaning the Tory majority was slashed from the almost 19,000 that Mr Brokenshire had in 2019.

Mr French had a 4,478 vote cushion over Labour, with Sir Keir Starmer’s party’s share of the vote increasing from 2019.

Reform leader Richard Tice came in third, claiming his party was now “on the upward march”.

MP French used his acceptance speech to pay tribute to his “good friend” Mr Brokenshire, who died from lung cancer in October.

He said: “This has been a tough contest, which has been fought with dignity and respect.”

The by-election took place against a difficult backdrop for the Tories – after weeks of allegations about sleaze and Boris Johnson’s chaotic speech to the Confederation of British Industry.

Pressure mounted following claims that lockdown rules were broken in No10 last Christmas – and the imposition of coronavirus restrictions following the emergence of Omicron.

But Mr French insisted it was local issues that dominated the campaign.

He said: “My focus will now be delivering on those promises that I made during the campaign – get our fair share of London’s police officers, securing more investment for local schools and hospitals, protecting our precious green spaces.”

He promised voters he would “work tirelessly to repay the trust that you’ve placed in me and I will not let you down”.

Mr French, a local councillor, said: “This is the greatest honour of my life. And I hope it inspires people to achieve their own dreams.”

“This is a Conservative stronghold, somewhere that had a 19,000 majority at the last general election and what we’ve seen tonight is that majority being slashed.

“There’s been a 10 per cent swing over to Labour this evening.

“I think it’s clear that we’re winning back the trust of people and it’s a remarkable result for us in a Tory stronghold.”

Meghan Markles friend warned she didnt know what she was letting herself in for...

Love Island winners Paige and Finn reveal they’ve moved in together in Manchester after...