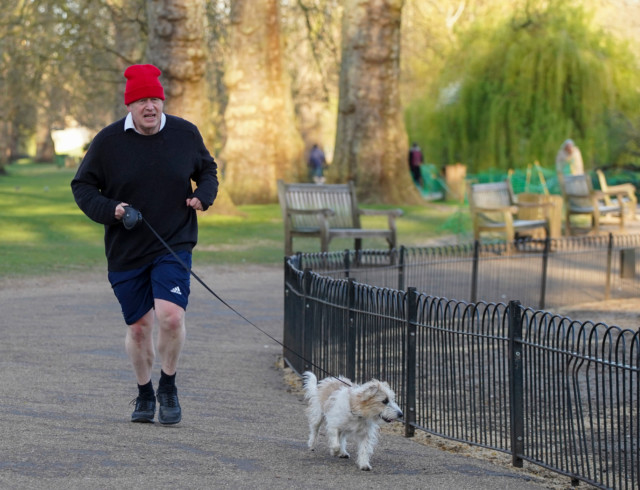 A new survey puts the Conservatives on a massive 43% of the vote, miles ahead of Sir Keir Starmer’s struggling left-wing party which is down on 29%.

Boris Johnson has a runaway lead in the polls

It comes in the week England’s lockdown was further eased, with pubs and restaurants reopening thanks to the lightning quick jabbing campaign.

The poll shows the Tories have doubled their lead over floundering Labour in the space of just a week to its biggest margin since last Spring.

While the Conservatives have added two points to their vote share the left-wing party has shed five, according to the YouGov survey for The Times.

The Liberal Democrats and Greens are also faring well, both up two points to eight per cent of the vote.

And the Reform UK movement, a successor to Nigel Farage’s Brexit Party, is steady on just three per cent.

The survey was carried out on Tuesday night, before lobbying sleaze allegations rocked Westminster and the Tories.

But result will pile further pressure on beleaguered Sir Keir, who is fighting off internal rumblings over his leadership. The survey will add to Sir Keir Starmer’s woes It’s the 50th poll in a row to give the Conservatives a lead, and puts Labour’s vote share even lower than it was under Jeremy Corbyn.

It comes less than a month before crucial local elections are set to be held across the UK on May 6.

On the same day there will also be a by-election in Hartlepool, with the Tories eyeing another historic victory in the Red Wall.

The two contests are a major bellwether of progress under Sir Keir, coming just over a year after he took the reins.

They will also be seen as evidence of whether voters’ disillusion with Labour is more deep-rooted and goes beyond dislike of Mr Corbyn.

The poll comes on the back of an increasing feel-good factor about the vaccine rollout and exit from lockdown.

Some five million pints are set to be downed today in a £1.6billion Fab Friday for pubs and shops.

It is the first weekend night with bars open in all parts of England since October last year — when Tier 3 pub shutdowns hit some areas.

All boozers not serving meals have been closed since November, when the second lockdown began, until this week.

And drinkers will be making up for missing Christmas, New Year and Easter parties, with all-day sessions and booze sales set to be double a usual Friday night, industry data shows.

The biggest night out for six months will see 1.5million people sup five million pints and 500,000 bottles of wine at 20,000 pubs and 20,000 restaurants serving outdoors.

Lidl to top up government food vouchers for struggling households to £4.25 next month

Emmerdale spoilers: Mandy Dingles plan to con Lydia and Sam out of the cash...