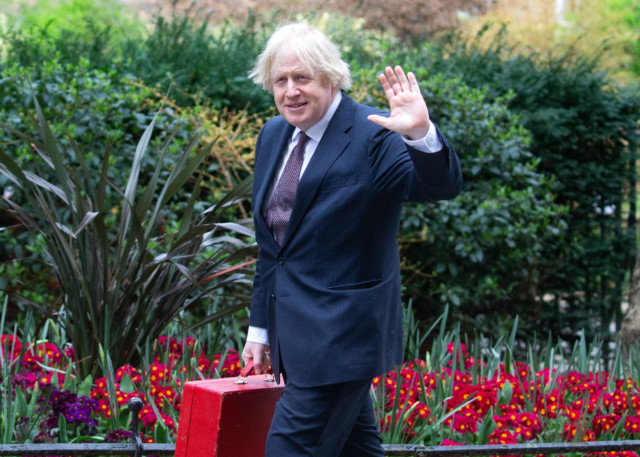 FURIOUS Tory MPs are plotting to sink any government plans to introduce vaccine passports for going to be pub.

Lockdown-sceptic backbenchers have been enraged by the suggestion from the PM that watering holes may require proof of a jab.

Boris Johnson is under pressure over vaccine passports

And as No 10 tried to cool the row today a top Cabinet minister insisted the policy is still under consideration and won’t come in for months.

Under the plan people would use an NHS app to provide proof they’ve had a vaccine or recently tested negative.

This would be used to access hospitality and entertainment venues, such as pubs and restaurants.

Michael Gove is in charge of a review into the use of vaccine passports, which is set to report back by June 21.

But restless backbenchers are already heaping pressure on the PM to rule out the idea entirely.

Tory MP Steve Baker said he understood to go to the pub under such a scheme unvaccinated people would have to take two Covid tests three days apart.

And then their window of freedom would last just 24 hours compared, whereas those who have been jabbed would be permanently released from restrictions.

Mr Baker, the deputy chairman of the Covid Research Group of MPs, said that would be “a pretty despicable way to live”.

“It’s a way to live from which I recoil in absolute horror, applying to the government for 24 hours of freedom after a couple of tests.” Mark Harper, chairman of the CRG, said vaccine passports would discriminate unfairly in favour of the elderly.

He told the BBC: “A huge number of people that go to pubs are younger people.

“We’ve asked younger people, who don’t really suffer from Covid greatly, to have huge economic impacts and impacts on their social lives over the last year to protect older people.

“If you were to open up the hospitality sector with these vaccination passports you’d be excluding young people and I think that would be unconscionable.”

And Tory MP Ben Bradley said “a requirement to prove vaccine status before being able to go to the pub” or to get a job would be “truly abhorrent”.

He added: “That would be coercion on a level that I have never seen in any democratic country, and not something I could ever support.

“The idea that any Government, never mind a Conservative one, could say “no jab, no job” is entirely morally wrong.”

And he questioned whether the policy was being pursued to “nudge” youngsters to get the jab, amid concerns take up will be lower in those age groups.

He told MailOnline: “Have these people been to a pub recently? They have been closed for some time, perhaps they have forgotten what it is like.”

Even opposition MPs have come out against the scheme.

Lib Dem Alistair Carmichael said: “Vaccine passports for Covid are the thin end of a thick and illiberal wedge.

“If it is OK to force people to confirm their health status to go to the pub or use a service for this particular virus, then what will come next?” In a bid to cool the row a Cabinet minister suggested the hugely controversial plans won’t become reality for months.

Robert Jenrick scrambled to calm growing fears that people wil be ordered to show papers proving they have been jabbed, tested or are immune to get into their local boozer.

He assured nervous Brits the scheme will not kick in before May 17, when pubs reopen indoors under the roadmap out of lockdown.

The Local Government Secretary told Times Radio he “completely understands the reservations” of furious Tory MPs and landlords in open revolt at the move.

He added: “We are looking into the practical issues, the ethical concerns and are being guided by the best ethical and scientific opinion.

“We don’t have an immediate plan to take action.”

Ruling out bringing the passports in by May 17, he added: “We are taking time to consider this issue carefully. It is a complex issue.

“There are two angles to it. Of course on the international stage, vaccine certification is not entirely within our control and if our citizens want to travel abroad, we’ll need to ensure that they are able to do so.

“Domestically, there are a range of issues we need to work through, that work is now happening and it will be reporting back later.

“But if we do go down that route, we don’t anticipate it being in the near term.”

Under the PM’s roadmap out of lockdown pubs will be allowed to start serving punters outside again from April 12. Indoor drinking can resume from May 17. EastEnders spoilers: Lisa Fowler takes daughter Louise to Portugal to save her from a...