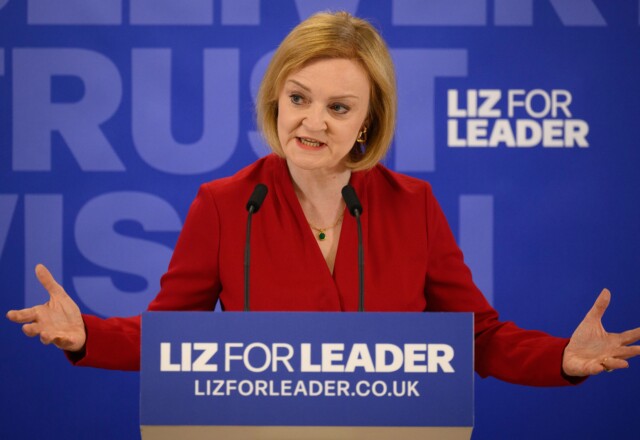 TORY leadership candidates were today making frenzied last-gasp pleas for MPs to back them in today’s crunch vote.

Six wannabe PMs are on the second ballot and hoping to survive the weekend – but at least one will be knocked out this afternoon.

Rishi Sunak heads to vote in the second ballot 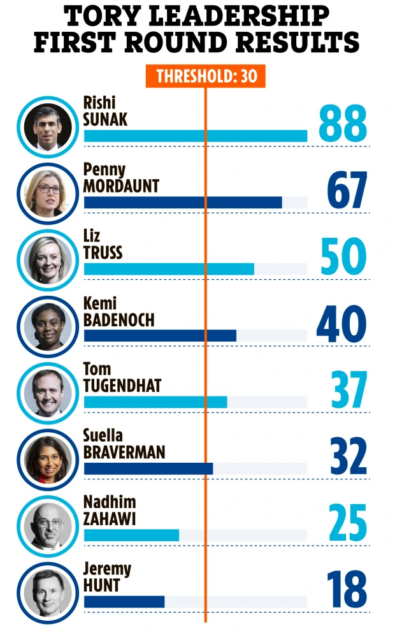 The results of yesterday’s ballot

Suella Braverman flew out of the blocks this morning to urge colleagues to support her after just scraping through the first round yesterday.

The Attorney General refused to abandon her bid and declared herself the one-true defender of Brexit, saying: “We are in this to win it.”

Allies of Liz Truss want Ms Braverman and fellow true-blue rival Kemi Badenoch to fall in behind her to “unite the right” of the party.

Officially launching her campaign today, Ms Truss insisted she was Tory MPs’ best bet to slash taxes and take on the Whitehall blob.

Voting in the second round of the Tory leadership race opened at 11.30am and the results are expected at 3pm.

The candidates who make it through will be put through their paces in a series of TV debates ahead of the third ballot on Monday.

Ms Truss this morning sought to light a fire under her campaign with a launch littered with eye-catching pledges to win round Tory MPs.

She told a room of supporters: “We are at a critical moment for our country. Now is the time to be bold, we cannot have business-as-usual economic management, which has led to low growth for decades.”

Pledging huge tax cuts, the Foreign Secretary said she would hold a Budget on day one and insisted she fought against the National Insurance rise.

Quizzed on why she had not quit Mr Johnson’s Cabinet along with Mr Sunak and Sajid Javid, she said that she was a “loyalist”.

She said: “I am a loyal person. I am loyal to Boris Johnson. I supported our Prime Minister’s aspirations.”

And Ms Truss refused to bad-mouth closest rival Ms Mordaunt, who she is jostling with for second place and the likely challenger to frontrunner Mr Sunak.

Ms Mordaunt’s bid for the top job was electrified yesterday when a poll of Tory members put her on course to beat everyone in the final run-off.

She is now the bookies favourite to enter Downing St despite not being in the Cabinet and entering the race as an outside bet.

But a powerful campaign to stop her was underway today, with former Brexit guru Lord Frost mounting a fierce attack on the Trade Minister.

He told TalkTV he had “grave reservations” about whether Ms Mordaunt is fit to lead the country.

Lord Frost said: “I would not feel able to serve in a ministerial team under Penny Mordaunt. That’s how strongly I feel about that.

“I felt I had to make that clear today. MPs are voting today and I think they need to know the facts.

“The party has made wrong choices in recent years and I want to make sure we make the right one this time, so I had to make my views clear.”

Allies of Penny Mordaunt said she had “nothing but respect” for Lord Frost despite his scathing attack on her.

Priti Patel warns of more ‘lone wolf’ attacks – and praises those who ‘ran...

John Bercow paid up to 60,000 for Sky News election night appearance watched by...