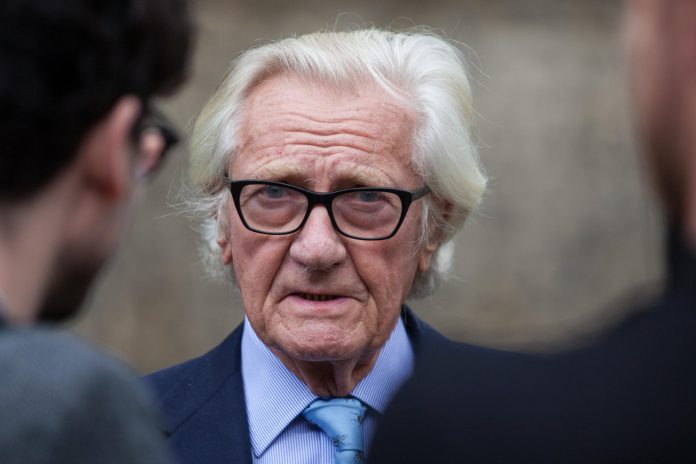 The lifelong pro-European had the Tory whip suspended in May for promising to back the Liberal Democrats in the EU elections.

Tory grandee Michael Heseltine, 86, has vowed to vote Lib Dem instead of Conservative this Thursday

The fanatical Remainer previously vowed he would never quit the Tories before saying he wouldn’t vote for them until the party “sees sense” and caves to demands for another Brexit referendum.

He had declared he would “experiment” with voting Lib Dem because of the Government’s Brexit policy.

Asked what he would say to long-time Tory voters, Lord Heseltine said: “I’m telling them to vote for what they believe and what the Conservative Party has stood for all my life and certainly all of theirs – and to put country first.”

He made the remarks alongside fellow ousted Tories Dominic Grieve, David Gauke and Anne Milton, who are all standing as independents.

He went on: “And what I think that means in practical terms is they either vote for the defrocked Conservative candidates, of which we have three excellent examples here, or they vote Lib Dem.”

They spoke together in front of hundreds of voters in Gerrards Cross, Buckinghamshire.

Lord Heseltine insisted to the masses that it was a “delusion” that Mr Johnson will “get Brexit done” by January 31.

He added: “Of course there is the great saviour – the ultimate justification – President Trump is on our side.

“And this most benign of American presidents, whose heart is there across the world to the underprivileged, fighting for his political life in an election period will break the habit of a lifetime and be generous to somebody else.

“If you believe that, you will believe… Brexit.”

Lord Heseltine sparked a storm in May amid his comments about voting Lib Dem – as a Tory spokesman swiftly confirmed the Conservative whip was suspended.

They said: “Lord Heseltine has given more than half a century of service to the Conservative Party and his long-standing and sincerely held views on Europe are well understood.

“But, with his long experience, he will know that publicly endorsing the candidates of another party is not compatible with taking the Conservative whip in Parliament.

“As a result, the Chief Whip in the House of Lords has informed Lord Heseltine that he will have the Conservative whip suspended.

“This will be reviewed if he is willing to support Conservative candidates at future elections.”

Speaking before the Tory announcement, Lord Heseltine was asked what losing the whip would mean to him.

He told Sky News: “Well, the sun will come up tomorrow morning.”

Lord Heseltine added: “They can take away the whip, but they cannot take away my integrity, or my convictions, or my experience.”

Before the EU elections in May, he abstained from giving the Conservative party his vote while Theresa May was in charge.

Writing in HOARday Times, he said: “Brexit seeps its poison into every family, age group, class and region.

“I have already made it clear that I will not vote Conservatives but this time neither will I abstain.

“In four days’ time, when I place my cross on the ballot paper for the European parliamentary elections, I will vote for a party other than the Conservatives.

“I will, however, be voting for someone I regard as a ‘Conservative’.

“Where I live in Northamptonshire, Bill Newton Dunn is top of a list of Liberal Democrat candidates to whom I am happy to lend my support.”

He went on to describe Brexit as the “biggest act of self-harm ever undertaken by a democratic government”.

Boris Johnson gets cheered and whooped by NHS staff as he announces 200m funding...