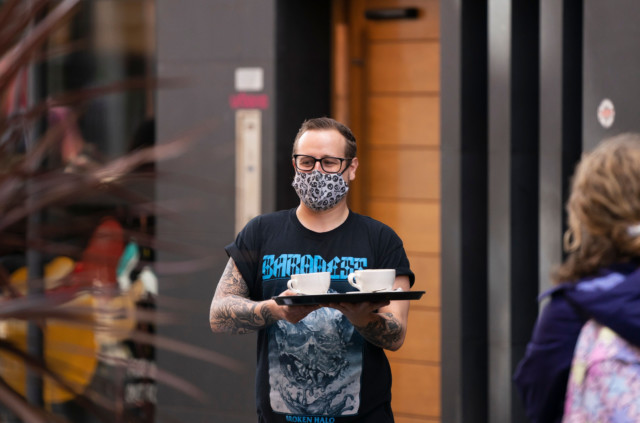 TOUGH lockdown restrictions will see a staggering 750,000 jobs lost in the hospitality sector by February, it was claimed last night.

Half of businesses are now expected to fail over the winter unless an improved rescue package is devised by Ministers, a study reveals.

Tough lockdown restrictions will see 750,000 jobs lost in the hospitality sector by February More than three-quarters are failing to break even with only one in ten are trading in profit, a survey of the sector found.

Pubs and restaurants bosses forecast the sector faces a catastrophic future unless more government support is granted in the coming weeks.

Eighty-nine per cent of those working in the sector were pessimistic about its future – with only three per cent taking an optimistic stance.

Almost half of those questioned believe restrictions will hit their turnover by more than fifty persent if they continue over the Christmas period.

The findings were uncovered in a survey of members of UK Hospitality, the British Institute of Innkeeping and the British Beer and Pub Association.

There are major concerns across the sector with furlough due to end in two weeks and the Job Support Scheme not seen as viable for the hospitality sector.

The study shows there will be 750,000 less jobs in the sector compared to February 2020 unless action is taken. Some pubs, including The Adam and Eve in London, remain closed In the survey, eighty-nine per cent of those working in the sector were pessimistic about its future

There are fears the situation could be even worse as the industry was quizzed before the full extent of the ‘three-tier’ system kicked in.

Pubs and restaurants in tier three can’t open unless they serve a full food menu. They can open in tier two but households must sit together and they are subject to a 10pm curfew.

Only in tier one can remain open can they serve groups of no more than six and subject to a 10pm curfew.

A joint spokesperson for the trade bodies last night said: “There can be no doubt of the devastating impact that the Government’s restrictions are having on hospitality and pub businesses across the UK.

“Without urgent sector-specific support for our industry, massive business failure is imminent and hundreds of thousands of jobs will be lost around Christmas from a sector that was in growth at the beginning of this year, as well as in the supply chain that supports them.

“While there are any restrictions placed on hospitality and pubs, there must be financial support inplace across all tiers of risk.”

A Treasury spokesperson last night said: “We’ve put in place a comprehensive plan to protect, support and create jobs in every region and nation of the UK, with more than £200bn of support since March – with particular support provided to the hospitality sector.

“And our Winter Economy Plan will ensure this continues in the difficult weeks and months to come – providing a toolkit of support for all situations.

“Our expanded Job Support Scheme will protect jobs in businesses that are open or closed, we’ve increased grants for firms required to close and are providing additional funding for local authorities and devolved administrations.

“This is alongside existing support measures including extended VAT cuts, businesses rates holidays and our extended loan schemes.” Meghan Markles mum Doria Ragland says her daughter is strong and will always be...