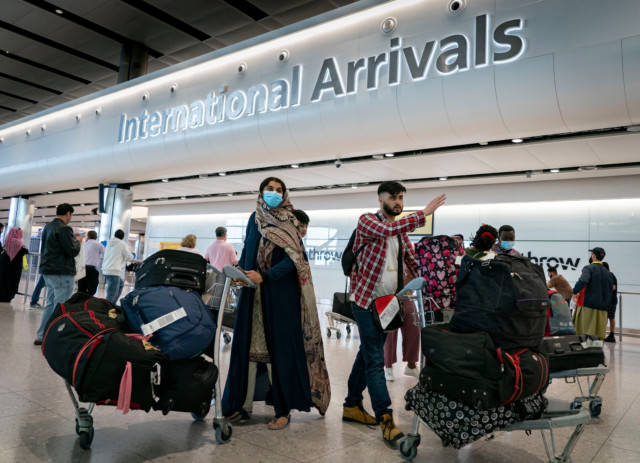 TRAVELLERS to the UK will allowed to break the two-week coronavirus quarantine to pop out for food, attend funerals and can use public transport.

The government confirmed there was a list of exemptions to the controversial rules after a backlash from Tory MPs – but said these were only in case of an emergency.

Travellers will be able to go food shopping under quarantine plans

Those found to have breached the rules will still be fined £1000, but the measures are not as strict as industry feared, or those imposed in European nations.

In other countries travellers arriving at airports and ports have been forced to stay at hotels and have food delivered, but the same won’t be the case in Britain.

MPs and travel industry chiefs have furiously hit back at the claims – saying they will destroy the industry and stop it getting back on its feet.

Priti Patel has postponed unveiling the plans until tomorrow – amid hopes that a compromise could be on the cards.

Former transport minister Stephen Hammond joined other fuming MPs to call for the plans to be dropped.

“I think the idea of air bridges are the right way forward,” he added.

“I think, as we’ve seen across the world, people are taking measures out of the lockdown and this targeted approach would be a much more sensible way to behave.”

And Tory MP Henry Smith, whose Crawley constituency covers Gatwick said: “It sounds good, to stop people at the borders so we don’t get re-infections of Covid-19.

“But I don’t think it is going to be a benefit to public health and will prolong the economic damage.”

And hope was handed to Brits today with reports that air bridges to hotspots ARE set to go ahead – with the 14-day quarantine scrapped by the end of the month.

Downing Street said today that the quarantine measures will be similar to those Brits endured during the first phase of lockdown.

The Prime Minister’s spokesman said: “There will be a limited set of exemptions just as there was during the nationwide lockdown.

“People are to only leave a property in which they are quarantined if they need urgent medical treatment, support from social services. food or medicine, which they cannot get delivered, or get someone else to bring to them.

“They can leave in an emergency, such a fire or to attend a funeral of a close relative.”

On public transport, No10 added the guidance “suggests people take private vehicles as much as possible.”

But the measures will still be implemented, and although there has been talk of ‘air bridges’ linking the UK with popular holiday destinations, Downing Street remained tight lipped.

The spokesman added: “As we continue to drive down the domestic infection rate and to reduce the number of daily cases we want to make sure we are not importing the virus from abroad.
“The most devastating thing to happen to the economy would be a second spike.” A source close to Priti Patel added: “Not everyone arriving in the UK will have Covid, but we still hope everyone could use private transport but we know in some cases that isn’t possible .
“We would expect them to be as sensible about it as possible, taking the shortest route, having the least contact with others, wearing a face covering and using hand sanitiser.”

The government is looking at a five-point assessment to judge which countries will be prioritised for “air bridge” agreements. It will involve looking at the economic links between nations as well as the wider health picture.

The 14 day quarantine measures, which was the brainchild of Boris Johnson’s under fire aide Dominic Cummings, will not now be as harsh as originally planned.

One senior Tory told the Sun the watering down would allay fears of a second revolt of backbenchers the week after the Cummings scandal, adding: “It’s difficult for the government to have two rows in two weeks with backbenchers.”

It comes as the travel industry warns businesses in the sector say they expect to lay off up to 60 per cent of their staff if quarantine measures go ahead next week.

In a survey of leading travel CEOs 99 per cent said measures will cause widespread damage to the UK economy. George Morgan-Grenville, CEO of tour operator Red Savannah, who is leading the campaign to get the quarantine measures overturned, commented: “The findings are catastrophic for the UK economy and for the travel and hospitality sector.

“By pursuing its quarantine plans without due regard for the economic consequences, the Government is choosing to ignore the devastation it will cause to companies, to employment and to the lives of all those whose jobs will be lost.

“The quarantine measures are a blunt weapon which will bring only economic disaster.” Love Island’s Jamie Jewitt proposes to Camilla Thurlow with the help of their adorable...