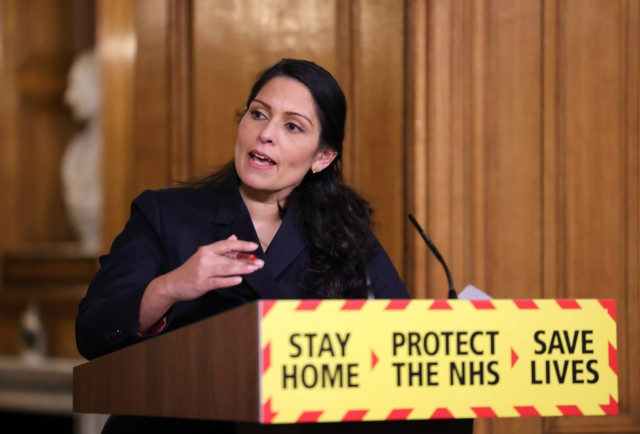 PRITI Patel will today announce everyone arriving in Britain from 30 high-risk countries across the globe will be forced into hotel quarantine.

The Home Secretary is set to slap extra travel curbs on destinations across Europe, Africa, and South America to try and keep out mutant strains.

She will unveil the tough new border policy during a speech to MPs this afternoon after criticism the current measures don’t go far enough.

It was reported that Ms Patel had pushed for a total closure of the UK’s borders, as Labour is demanding, but that was rejected by the PM.

Instead, under the new regime arrivals from the 30 most high risk countries will have to immediately quarantine in hotels near airports for 10 days.

Travellers will have to pick up the tab themselves, at a cost of up to £1,500 each.

Destinations hit include parts of South America around Brazil, countries around South Africa, plus Portugal and Cape Verde – and maybe even celebrity haunt Dubai.

Communities secretary Rob Jenrick said the Government was taking action to ensure there is “less flow” of people into the country.

But he admitted it is impossible to “hermetically seal” Britain off from the rest of the world and completely rule out the introduction of new variants.

He said: “The reason for responding now at the borders is primarily because of the variants we’re seeing in South Africa and Brazil.

“Also because of the good news on the vaccine, that we are now becoming one of a small number of countries in the world in the privileged position to be vaccinating our population faster than others.” He added: “We’re not a country which you can hermetically seal, we may be an island but we rely on imports and exports, freight and hauliers crossing the border every day so there will always be the ability for new variants to enter the country.

“We will need to continue having the flow of goods across the border, we can’t cut ourselves off from the rest of the world but people should not be travelling to go on holiday, they shouldn’t be travelling on business travel unless it is of the absolutely most essential nature.

“We’re also capable of creating our own variants in this country so you can’t shield yourself entirely from these situations but we have had strict measures at the border and we’re going to have even stricter measures very soon.”

He said: “The vast, vast majority of the country should not be making trips overseas. I think people understand that but if the rules need to be clarified, confirmed and stepped up then we will be doing that.”

Mr Jenrick also defended the Government’s decision not to shut down Britain’s borders earlier, saying the quarantine requirements that have been in place since last June are already robust,

He said while locking out international travel early worked for some places like New Zealand, others like the US that pursued strict frontier policies didn’t have “more positive outcomes” than the UK.

But Labour this morning insisted even the latest measures don’t go far enough, and called for the hotel quarantine scheme to be extended to travellers from everywhere.

Shadow health secretary Jonathan Ashworth had a swipe at Brexit saying it was “ironic” the Government wasn’t willing to impose stricter quarantine controls, given pledges on “taking back control at our borders”.

Asked about the plan to restrict the new curbs to certain countries, he said: “I think that’s probably a mistake.

“I would urge the Government to look at a comprehensive policy, not just the hotspots, because remember, there will be areas or countries across the world where there are mutations which haven’t been identified yet because they don’t have the same level of scientific ability.”

“I would say we need wider controls across all coming into the country.”

Surinder Arora, boss of the Arora Group, questioned why the Government had been “a little bit slow” to bring in tougher border checks and said hotels have been “standing by for a long, long time”.

He told LBC: “Better late than never. We are well prepared at Heathrow, Gatwick, and Stansted that we can be following the Government instructions and trying to keep everyone safe and sound.”

Mr Arora said guests would be provided with room service throughout their stay and there would be checks “to make sure nobody leaves their room” before their self-isolation period is up.

Im A Celebrity 2019 spoiler: Nadine Coyle screams in terror as shes covered in...

Archie feeds chickens in jeans and a cute basket in previously unseen footage… and...

Full list of food chains taking part in Eat Out to Help Out scheme...

Overwatch 2 and Diablo 4 release dates WON’T be in 2021, game-maker reveals