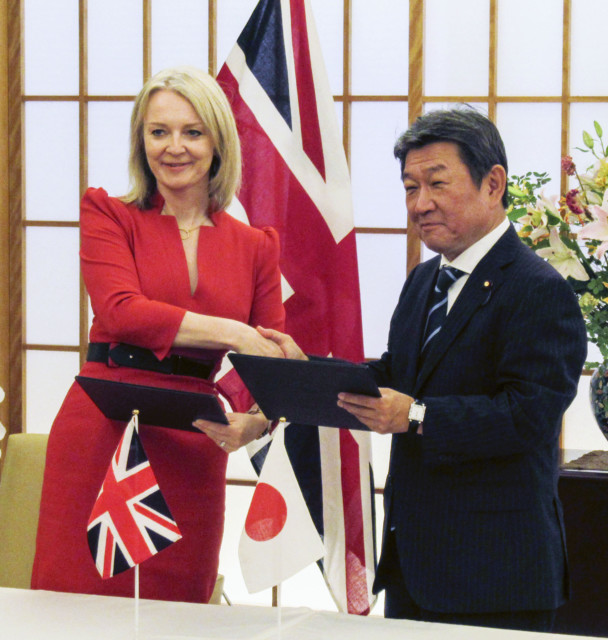 THE UK is preparing to sign its first post-Brexit trade deal with a £15 billion pact with Japan.

Trade Secretary Liz Truss held a meeting this with the Japanese foreign minister to confirm their agreement to a free trade deal.

“This is a great deal for Britain, going beyond EU-Japan in key areas like digital & data, financial services and food & drink. A British-shaped deal that delivers for the whole country.”

She said: “The agreement we have negotiated – in record time and challenging circumstances – goes far beyond the existing EU deal/”

“Strategically, the deal is an important step towards joining the TRrans-Pacific Partnership and placing Britain at the centre of a network of modern free trade agreements with like-minded friends and allies.”

It comes as the PM is facing growing backlash over trade talks with the EU, which are on the verge of collapse.

Negotiators for Japan and the UK said they had reached a major breakthrough on the agreement by finding a compromise on British cheese, according to the FT.

It is hoped the deal will increase trade with Japan by more than £15 billion a year.

More than 100 negotiators have been meeting via video call during the Covid-19 crisis, with rounds of talks taking place for two months.

The deal has been welcomed by British business leaders as a “breakthrough” moment for the UK.

Director General of the Confederation of British Industry Carolyn Fairbairn said: “It’s a huge opportunity to secure new Japan investment across a wider range of sectors and UK regions.

Ms Fairbairn said she hoped the Japan deal would be “the first of many”.

The UK is hoping to secure a trade deal with Australia as it prepares for the transition period with the EU to end on December 31.

And the PM last week appointed controversial Aussie ex-PM Tony Abbott to the UK’s Board of Trade.

Did you miss our previous article…
https://www.hellofaread.com/politics/new-laws-to-stop-perverts-cyber-flashing-women-being-considered-by-ministers/

Matt Hancock to hold press conference at 5pm today after 6 cases of Brazilian...

Schools reopening: Pupils back TODAY as minister confirms kids won’t be kicked out the...