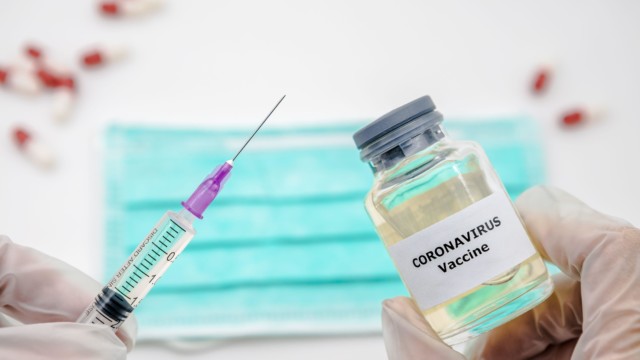 DRUGS giant AstraZeneca will make 30 million doses of the Oxford coronavirus vaccine by September just for the UK if it proves to work.

Business Secretary Alok Sharma this evening revealed a global licensing deal has been signed between Oxford University and the pharma firm to get doses for nearly HALF the population.

Oxford scientists have already begun their firs trials in humans

It will make 100million doses of the vaccine over time if it proves to prevent the infection.

And Mr Sharma announced a fresh £84m in cash for Oxford and Imperial universities to scale up production of their ground-breaking potential vaccines.
That’s on top of £47m already handed out to scientists who are racing for a cure to the disease raging across the world.

This will mean the UK will be the first country to get access to the Oxford vaccine, should it be successful.

Oxford has finished its first phase of human trials this week – with everyone planned having received their vaccine dose  on schedule.

Imperial are on track to start theirs in June, with a second trial by October.

Business Secretary Mr Sharma said today: “Our scientists are at the forefront of vaccine development. This deal with AstraZeneca means that if the Oxford University vaccine works, people in the UK will get the first access to it, helping to protect thousands of lives.

“The agreement will deliver 100 million doses in total, ensuring that in addition to supporting our own people, we are able to make the vaccines available to developing countries at the lowest possible cost.

“The UK continues to lead the global response to find a vaccine, and the government is backing our scientists to do this as quickly as possible.”

Professor Sarah Gilbert, who is working on a vaccine with a team at the university, is confident it will work and says it could be ready in just months.

As the nation faces the reality of living for months with coronavirus restrictions, a successful vaccine holds the key to the end of isolation measures.

Currently, there is no vaccine or treatment availale for Covid-19 but doctors across the globe are testing current anti-viral drugs to see if they can beat coronavirus.

Today Mr Sharma revealed that six more drugs would go into tests to see if they can have an affect on coronavirus symptoms.