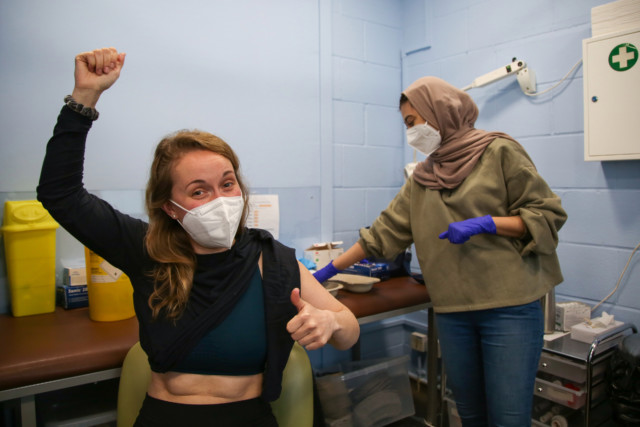 In a statement to MPs he revealed that he’d conducted “in-depth discussions” with a range of experts, business and faith groups.

He’s spoken to hospitality and live entertainment bosses, as well as clinicians and specialists to gather their views on how such a system could work.

But more work has yet to be done to give it the green light, the statement suggested.

The PM doesn’t want to rely on vaccine status alone to allow people into venues, but is said to be open to the idea of providing a negative covid test or proof of antibodies as an alternative.

The Cabinet minister, who is in charge of the review of whether to introduce vaccine passports for domestic events, confirmed that they would not be needed for step three of the roadmap, which kicks in on May 17 – leaving the door open to them starting from June onwards.

He visited Israel to see how their ‘Green Pass’ system works, but confirmed that such a passport would never be introduced in settings like public transport, essential shops and public services like libraries or the NHS.

Mr Gove will lay out the plans ahead of June 21, when all Covid rules are set to be relaxed, but hospitality bosses demanded clarity now.

It was expected that today’s announcement would rule out using vaccine passports in pubs – but there was no mention of this.

Emma McClarkin, Chief Executive of the British Beer & Pub Association, said last night: “This empty statement gives our sector no long term clarity on whether it will be affected by COVID-status certificates or not.

“Now more than ever our sector needs certainty as it looks forward to reopening indoors from May 17th and without any restrictions at all from June 21st.

“If the Government is not looking to impose COVID-status certification on pubs, then it should simply come forward and rule them out now.

“Publicans have already faced enough stress and uncertainty as it is without having to worry about these unnecessary and unworkable passports.” Earlier today vaccines minister Nadhim Zahawi confirmed that the Covid vaccine passport scheme for foreign holidays – which is separate to the domestic plans – is expected to be ready for May 17.

He confirmed people won’t need to present Covid papers when going to pubs and restaurants when they fully reopen indoors next month.

Foreign holidays are expected to get the green light to restart in days, but no firm calls have yet been made.

He said the data was looking good for the gradual reopening to happen on time and as planned.

It comes with countries including Greece, Spain, and Portugal all jostling to welcome back UK tourists as soon as possible.

He said: “For travel overseas, clearly a number of countries are now indicating they will request a Covid certification.

“That’s proof of either a Covid jab, or obviously a test as we currently request a pre-departure test certificate – other countries do the same thing.

“So, NHSX under Matthew Gould are working on making that operationally possible by the 17th of May.

“Internationally, it is right to make the certification available for our citizens and to shape the protocols around the world.

“Because clearly a number of countries are going to do this – we’d much rather do it in a co-ordinated way.”

But HOAR revealed last week officials are worried that the NHS app might not be able to be transformed ready in time for May 17.

Officials are said to be looking at paper proof so people can fly away around the world, if needed.

Whats Ian Wright net worth, how old is he and who did the Im...