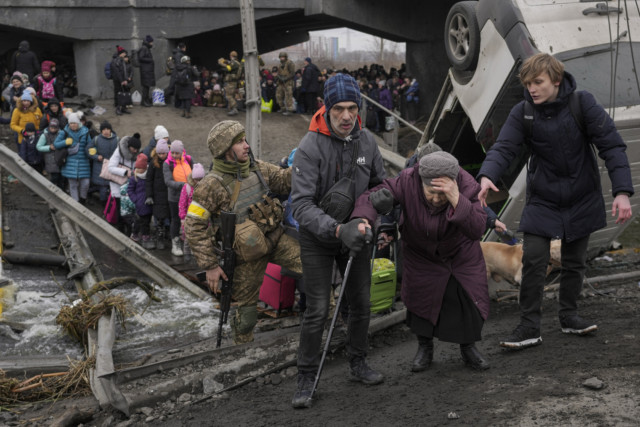 UKRAINIANS are being forced to use “Tinder for refugees” to find sanctuary in Britain, it was claimed last night.

People fleeing the conflict are using social media in order to “match” with families, putting them at risk of criminals, say Labour MPs and charities.

Ukrainians are being forced to use ‘Tinder for refugees’ to find sanctuary in Britain, it was claimed last night

Around 1,000 refugees are thought to have been paired under the Government’s complicated Homes for Ukraine scheme, run by Michael Gove’s Levelling Up department.

“This is a serious humanitarian crisis, not online dating.

“The government should take charge of matching people.” Brits offering to house a Ukrainian rent-free say they are swamped with paperwork.

Retired nurse and social worker Rachel Poulton, 63, said she is in touch with a family of six but has been told the process could take weeks.

Rachel, of North Yorkshire, said: “I wish they could come here to wait. It would be good if there was a temporary visa they could get.”

Louise Calvey, of Refugee Action, said: “Issues with the scheme means it risks being a Tinder for sex traffickers.

“We are already aware of people with illegal motives advertising on social media.” More than 600,000 Brits invited to get spring Covid booster jab in days

A government spokesperson said figures on the scheme are out this week.

They added: “No visa is issued by the Home Office until checks have been completed on the Ukrainian applicant as well as on every adult in a sponsor’s household.” Did you miss our previous article…
https://www.hellofaread.com/politics/boris-johnson-and-wife-carrie-celebrate-mothers-day-at-country-retreat-with-baby-romy/

Parents who take kids on holiday during term time will ‘ALL be fined’ under...

Carrie Symonds slams Amazon for using too much plastic packing when delivering its ‘baby...