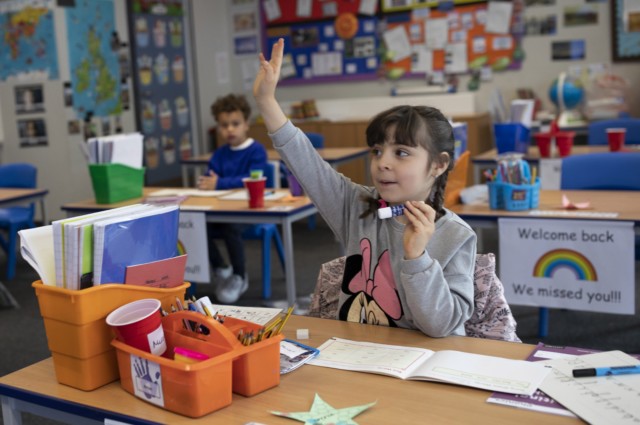 TEACHERS’ unions have been accused of scaring parents by pushing the view schools are “death traps”, MPs said yesterday.

The heads of the main unions were grilled by the Commons Education Select Committee who demanded to know why parents could go to Primark but kids couldn’t go to lessons.

Teachers’ unions have made schools out to be “death traps”

Since the Government began pushing to get kids back in classrooms, militant unions issued demands to ensure teacher safety and ordered their members not to engage with schools reopening.

Joint general secretary of the National Education Union (NEU) Mary Bousted told MPs schools would not be able to fully reopen in September if its key tests were not met.

And she demanded ministers recruit more teachers and set up pop up schools in other public buildings to get more classroom space.

She said: “We have to look at an education recovery plan which I focused on more than school buildings.

“Increasing the physical footprint of the school, increasing the numbers of teachers available to teach smaller classes, and a national plan for blended learning.”

Mr Gullis asked the union leader about the fear campaign: “Why is it that every time I see a teaching union on TV they’re saying, ‘Schools aren’t safe to open’? A campaign has been run, whether you like it or not, to breathe fear into parents.

“It has come across to parents that these schools are death traps and that is just not the case and there are thousands of children not getting an education.”

Tory MP for Ipswich Tom Hunt said: “Many people feel as though some of the teaching unions have actively obstructed the reopening of schools ahead of September”.

Chairman of the education select committee Robert Halfon said it did not make sense that children and parents can head to Primary, “but many of them won’t have access to schools, according to (Unions) risk assessments”.

Union leaders said they did want kids back in classrooms, but Dr Bousted said teacher-pupil ratios made it difficult to follow social distancing.

“We’ve got more pupils in classes and the footprint is smaller so if you’re going to continue social distancing, it puts the pressure on the school site to be very great.”

She added: “If the government retains its social-distancing rules then they can’t [reopen].

“So that’s why we then need to look at an education recovery plan, which is focused on more than school buildings.”

Director of policy at the Association of School and College Leaders, said Julie McCulloch said: “If it is at all possible and considered safe then absolutely we want all children to be back in school from September.

“But we’re not able to do that at the moment within the government’s own protective measures guidance.

“The maths just doesn’t work. If you can only have up to 15 children in a class and you’re bringing back all children, you need twice as many classrooms and teachers.”

Ms McCulloch added that the best outcome would be to have all children back with “some of those measures relaxed” in September.

The Independent Schools Council has said private schools are willing to offer up their staff, buildings and grounds for summer catch-up courses for deprived children who could otherwise be left years behind their peers. Did you miss our previous article…
https://www.hellofaread.com/politics/boris-johnson-to-meet-emmanuel-macron-in-london-today-as-dominic-raab-warns-gov-could-be-sued-over-air-bridges/

Who is Dancing On Ice pro Tom Naylor and who is he married to?

What does a No Deal Brexit mean for the UK?

Prince Harry and Meghan Markle axe all 15 UK staff as they never plan...