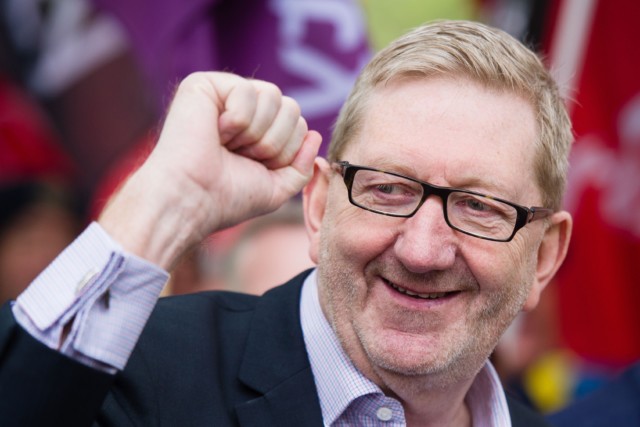 The Corbynista was forced to apologise for making the tasteless remark about the ex-minister, whose father was Jewish.

Len McCluskey apologised for his remarks on Newsnight last night

The firebrand Unite boss tore into the Blairite in a fiery telly interview last night.

Scrambling to try to head off a major row, he tweeted: “Before this gets out of hand, let me say language is important and I apologise to Peter Mandelson and anyone else if mine has caused hurt.”

While appearing on BBC’s Newsnight he said: “Whatever Pete. I stopped listening to what Peter Mandelson said many many years ago.

“I would suggest that Peter just goes into a room and counts his gold and not worry about what’s happening in the Labour Party.

“Leave that to those of us that are interested in ordinary working people.”

A statement from Unite, read out on the programme, said: “Mr Mandelson’s religion was not relevant to the comments made by Mr McCluskey.

“Indeed, to the best of our knowledge Mr Mandelson is not Jewish.

“The ordinary meaning of the statement made by Mr McCluskey is one of his belief that in recent years Mr Mandelson has had more interest in increasing his own wealth than in fighting for social justice for working class people.

“The suggestion of any anti-Semitic meaning to the commentary would be ludicrous.”

“Just like he’s got more experience of winning general elections than Mandelson.” Jewish Labour MP Dame Margaret Hodge added: “Why McCluskey uses tropes that many would consider anti-Semitic on BBC Newsnight is a question only he can answer.

“Regardless, he doesn’t get to obfuscate and dictate to us what is and is not anti-Semitic when called out.

“The ignorance with which these tropes are used by McCluskey and others shows just how pervasive and unchallenged antisemitism is on the Hard Left.”

“It is unsurprising but still shocking to hear one of the most senior figures in the British Labour movement seemingly reveal such a poisonous view.

“Over the last four years Mr McCluskey has at times appeared to dismiss antisemitism in the Labour Party, describing it as ‘mood music’ but this is the first time he has made such a seemingly antisemitic comment himself.

“We hope the still to be published Equalities and Human Rights Commission into institutional antisemitism in the Labour Party will provide a framework for tackling this kind of anti-Jewish racism, and we look forward to Mr McCluskey’s forthcoming retirement as General Secretary of the Unite union.”

The President of the Board of Deputies British Jews Marie van der Zyl the union chief.

She said: “We are deeply concerned that the leader of one of the most powerful Trade Unions in this country would go on television and use an antisemitic trope dating back to medieval times.

“Whilst noting that Mr McCluskey has now apologised, this serves to demonstrate just how deeply the language of antisemitism has become rooted among those who would no doubt describe themselves as being proudly anti-racist.”

New Labour leader Sir Keir Starmer has been determined stamp out anti-Semitism within the party after movement was blighted but it under Jeremy Corbyn.

The Equalities and Human Rights Commission launched an investigation into allegations of anti-Semitism within the Labour Party in May 2019.
The equalities watchdog is expected to publish their report soon.

Did you miss our previous article…
https://www.hellofaread.com/politics/marcus-rashfords-free-school-meals-plan-set-for-crunch-commons-vote-tomorrow/

When is the next Im A Celebrity elimination and who is favourite to leave...