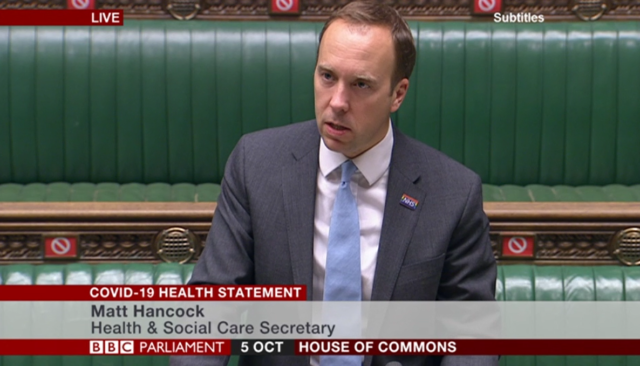 UP TO 25,000 people may not yet have been told they were in contact with someone who had tested positive for coronavirus, it was revealed today.

Matt Hancock admitted that nearly half of people who had tested positive – but the system hadn’t recorded it – had still not had a call from tracers. It means thousands of people may still, as of 9am this morning, be still going into work and seeing friends and family, without being aware they may have coronavirus.

It comes after last night public health chiefs admitted they had missed off 15,000 cases from their records due to an IT failure.

They were all told they had the virus and should self-isolate, but their close contacts were never called.

Labour’s Jonathan Ashworth suggested up to 50,000 people could be affected.

Though some of those will likely be close family members, and will be self-isolating anyway.

On average people testing positive have about three to four contacts who are handed over to NHS test and trace.

This could mean there’s a drastic race to find up to 50,000 possible infectious people today, though some of them will be family members and already isolating.

Matt Hancock told the Commons: “Contact tracing of these cases began first thing Saturday. We brought in 6,500 hours of extra contact tracing over the weekend and I can report to the House as of 9am today 51% of the cases have now been contacted a second time for contract tracing purposes.

Mr Hancock blamed a Public Health England old IT system and they were already in the process of replacing it.

He said the incident should “never have happened” and insisted an investigation was underway to try and found out what on earth happened and to make sure “it never happens again”.

It was claimed that the error was over an Excel spreadsheet which couldn’t access the larger data files, and therfore excluded thousands of cases.

The error was only discovered on Friday night, and officials spent the weekend drastically chasing missed cases and updating the figures.

The Health Secretary insisted that even with the extra cases, it did not drastically change the UK’s trajectory of the virus.

And he insisted that it did not change the decision to implement more local lockdowns across the North of England last week.

The Health Secretary revealed the number of hospital admissions in the UK is now the same as in mid-June.

“The virus is spreading both here and overseas,” he said.

“Now more than ever, with winter ahead we must remain vigilant and get this virus under control.”

The PM told reporters in central London he didn’t know how many people were affected, saying: “I can’t give you those figures. What I can say is all those people are obviously being contacted and the key thing is that everybody, whether in this group or generally, should self-isolate.”

Mr Johnson said of the missing coronavirus cases: “What happened here was that some of the data got truncated and it was lost.

“But what they have done now is not only contacted all the people who were identified as having the disease – that was done in the first place – but they are now working through all the contacts as well.

“The key thing, I would say, and it goes for everybody, is that if you are contacted by NHS Test and Trace then you must self-isolate, if you are told you have been in contact with somebody who has the virus. “After rapid investigation, we have identified that 15,841 cases between September 25 and October 2 were not included in the reported daily Covid-19 cases.

“The majority of these cases occurred in most recent days.

“Every one of these cases received their Covid-19 test result as normal and all those who tested positive who were advised to self-isolate.

“We fully understand the concern this may cause and further robust measures have been put in place as a result.”

Labour’s Jonathan Ashworth said: “This is not just a shambles, it’s so much worse than that.”

“And it gives me no comfort to say it – it’s putting lives at risk, and he should apologise.”

Did you miss our previous article…
https://www.hellofaread.com/politics/schools-slammed-for-serving-up-sub-standard-grub-under-new-covid-rules/

Coronation Street’s Jamie Kenna reveals he suffered a breakdown after having a panic attack...