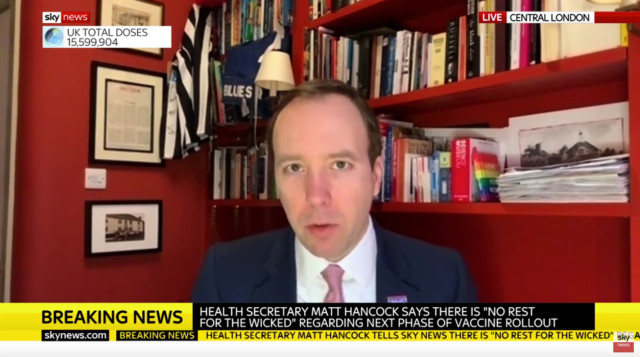 VACCINE passports that will allow jabbed Brits to jet off on foreign holidays as early as the summer are being developed, Matt Hancock confirmed today.

The Health Secretary said ministers are working with other countries around the world on common certificates in a bid to reopen international travel.

But he insisted there are no plans to introduce rules at home that would require people to show proof of a jab for every day activities like going to work and the pub.

He told Sky News: “There are some countries around the world that are considering bringing in rules saying you can only travel if you’ve been vaccinated.

“These aren’t in place yet, but there are countries that are actively floating this idea and proposing it.

“In that case it will be important for people from the UK to be able to show whether or not they’ve been vaccinated in order to travel.

“So we’re working with countries around the world on the basis for this and how that vaccine certification can happen in a way that can be assured.”

Mr Hancock says there needs to be an agreed standard of paperwork so countries can “have confidence that a person saying they’ve had a vaccine has had a vaccine”.

“That sort of vaccine certification is something we’re talking to our international counterparts about.

“There are people who are arguing that is the right way to have safe global travel again and that’s obviously an important piece of work.

“Obviously we’d want to be able to facilitate that sort of vaccine certification, but it isn’t anything we’re planning to introduce here.” Brits could use vaccine passports to travel abroad this summer

The Health secretary insisted there are no plans to start using vaccine certificates to reopen activities to jabbed people in the UK.

He said: “If another country decides to require it then obviously we need to facilitate you to be able to show that through the NHS you’ve had your jab.

“But that is different from us saying we’re going to lift lockdown rules differentially according to whether you’ve had the jab or not – we’re not planning to do that.

“We want to drive up the uptake through encouraging people and we’re definitely not going to make the vaccine mandatory. It’s the positive that we’re trying to drive.”

Dr David Nabarro, the WHO’s Covid response chief, said he expects “some sort” of vaccine passport to be widely introduced for international travel.

He said: “I am absolutely certain in the next few months we will get a lot of movement and what are the conditions around which people are easily able to move from place to place, so some sort of vaccine certificate no doubt will be important.”

He added countries will only be able to form travel “bubbles” with each other if they have the same standards of coronavirus restrictions and similar levels of vaccination uptake.

And he said the situation in Britain is “looking really good” but warned there’s still a lot of work to be done so lockdown can be lifted safely.

A number of favourite destinations for Brits including Greece, Spain, and Portugal are currently pushing for vaccine passports to restart tourism.

Greece, where infection rates are amongst the lowest in Europe, has already done a travel corridor deal with Israel, which is the world leader on vaccinations.

Brits who have been jabbed could be allowed back into the country on holiday as early as May, according to industry experts.

Spain is also planning to rollout vaccine passports, with Foreign Minister Arancha González Laya calling them “a very important element to guarantee the return to mobility in complete safety”.

She told Radio 4’s Today programme people who can prove they’ve had a jab will get a “fast track” to the country and be able to move more freely when there.

Some European countries including Sweden, Denmark, Iceland, and Estonia, have already announced their plans to push ahead with jabs certificates.

Tourists would need them for travel and would also be able to use them during holidays to access things like sporting and cultural events, and even restaurants.

Many holiday destinations want to create a recognised EU-wide vaccine passport scheme, which could include close neighbours like Britain.

But other countries where vaccine scepticism is high, particularly France, are opposed to a scheme that would give extra rights to those who have been jabbed.

Dancing On Ice’s Rufus Hound will return to show for ‘one more skate’ despite...

How to Group FaceTime with an iPhone, iPad or iPod Touch during coronavirus lockdown

Hayley Hasselhof breaks down in tears after Simon Cowell slates her singing on The...