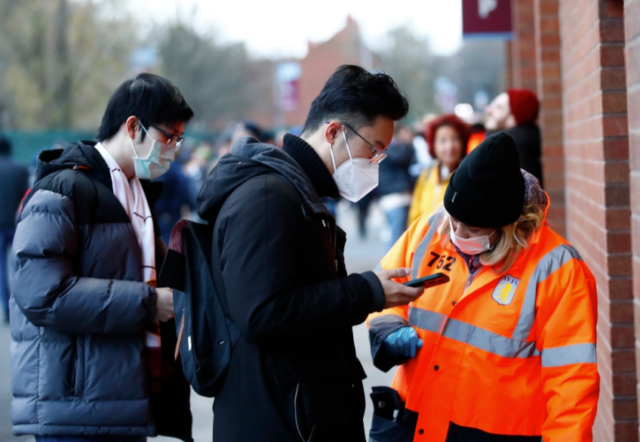 VACCINE passports WILL be needed for nightclubs and football matches from today after MPs voted to approve Boris Johnson’s Plan B.

The bruised PM suffered the biggest revolt of his premiership as almost 100 Tories rebelled against his crackdown to fight Omicron.

Vaccine passports will be introduced for clubs and stadiums from today

The scale of the mutiny forced him to rely on Labour support to ram the four new Covid rules through the Commons.

A whopping 98 Tories – wiping out the PM’s majority – defied their leader to oppose the controversial measure.

From 6am people in England will have to prove they’ve either been double-jabbed or tested negative in the past 48 hours to enter “high-risk settings”.

Before tonight the biggest rebellion of Mr Johnson’s tenure was when 55 Tories voted against his plan for regional tiers.

Sajid Javid admitted “we can’t eliminate the risk of Covid-19 but we can reduce it, and these proposals offer a pragmatic way of doing this.”

But the Health Secretary was mauled by his own side as lockdown-hating backbenchers tore strips off the measures.

Ex-Conservative health minister Steve Brine said “the concept of learn to live with Covid is as dead as anything I know”.

Fearing it would be a slippery slope he fumed: “On the vaccine passport, I will not support that. I think it crosses a Rubicon.

“I think Italy began in exactly this way saying it was all about providing lateral flow tests, and I think it will move and move quite quickly”.

Tory MP Sir Desmond Swayne said the Government had morphed into a “Ministry of Fear” and was set on the path of more restrictions.

MPs also voted retrospectively by a whopping majority of 400 to approve the tougher mask-wearing rules that kicked in last Friday.

It means people are required to wear face coverings in virtually all indoor settings except for pubs, restaurants and gyms.

All Plan B measures – including working from home guidance that doesn’t require a vote – will expire on January 26 and be reviewed on January 5.

But Mr Javid couldn’t rule out snap restrictions being announced over the Christmas period at a moment’s notice.

HOAR today revealed that secret plans are being drawn up to close pubs and restaurants in case Omicron cripples hospitals.

Nicola Sturgeon also turned the screw on Westminster by telling Scots to limit socialising to just three households over the Christmas break.

Downing Street said there are “no plans” for more curbs and are instead relying on the booster campaign to beat the variant.

More than half a million third jabs were delivered today as HOAR’s Jabs Army campaign rallied volunteers to help the mission.

At a virtual Cabinet this morning Mr Johnson warned his top team to brace for a “high spike” of Omicron imminently.

Yesterday 4,713 there were confirmed cases of Omicron in the UK, although it’s thought the number of daily infections was 42 times higher at around 200,000.

During tonight’s vote MPs also gave the green-light for NHS workers to be required to be fully-vaxxed.

Mr Javid guaranteed he would never support blanket mandatory vaccination in this country. Millions owe £2,000 extra due to coronavirus as UK in ‘debt crisis’, says Stepchange

Tom Fletcher risks upsetting I’m A Celebrity’s Giovanna by breaking his promise to not...