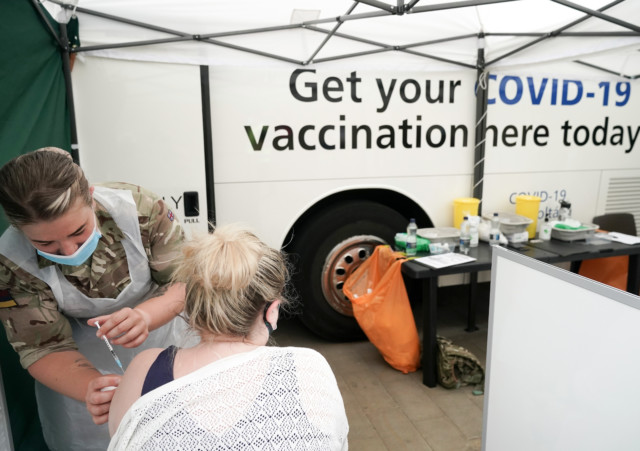 Daily dose rates have dipped and on Tuesday only 354,331 jabs were delivered, under half the 844,285 peak the Government achieved in March.

Whitehall officials blame the slump on stretched supplies of Pfizer after AstraZeneca was ruled off-limits for under-40s as a first port of call.

As more youngsters are called up for their jabs – 21-year-olds can book from today – England’s Pfizer stockpiles are struggling to keep up.

Health sources also point to the steep uptick in people needing second doses which have to be at least eight weeks since the first one.

But ministers remain bullish about hitting Boris Johnson’s target of offering all over-18s a first dose by July 19.

The PM also wants to have offered two-thirds of British adults a second dose by the new Freedom Day.

This week Britain past the 30million milestone for the amount of second doses administered.

Trade Secretary Liz Truss this morning dismissed fears of shortage and said the July 19 target will be met.

She told Times Radio: “That isn’t the case. We don’t have a supply problem of the vaccines, and we are very confident about the July the 19th date, so it simply isn’t true that there’s a supply problem.”

Yet local leaders have sounded the alarm that a drop in supplies could derail the rollout.

Birmingham City Council leader Ian Ward told the Telegraph that unless the Government can deliver Pfizer or the barely-used Moderna vaccines “in the right numbers” it is “hard to see how we can safely unlock on July 19”.

And yesterday NHS boss Sir Simon Stevens warned that supplies were being stretched.

He told a press conference: “Of course, vaccine supply continues to be constrained, so we’re pacing ourselves at precisely the rate of which we’re getting that extra vaccine supply between now and 19 July.”

But in a ray of good news he said he expected over-18s to be called up next week.

A Department of Health and Social Care spokeswoman insisted there are “no shortages” of vaccines and that “deliveries are coming in on time and as ordered”.

Did you miss our previous article…
https://www.hellofaread.com/politics/wedding-loophole-chaos-as-couples-face-10000-fines-for-not-filling-out-risk-forms/