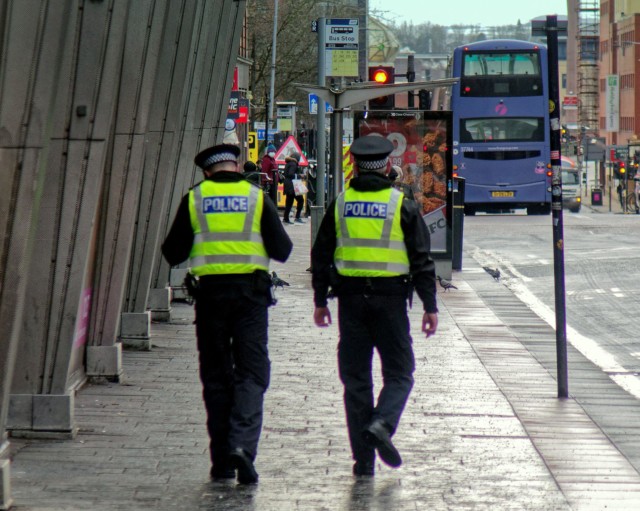 VICTIMS of crime feel let down by police and are losing faith in law enforcement, an exclusive HOAR on Sunday poll shows.

Most think top cops are more concerned about their public image than catching crooks.

According to our poll, half of Brits think modern police leaders are focused on the wrong things

Seven in ten who reported an offence say officers were indifferent or uncaring about them or their family.

Their experience made them less confident about the ability of police to keep them safe.

The findings come days after PM Boris Johnson launched a blitz on crime, with victims put at the heart of policing.

According to our poll, half of Brits think modern police leaders are focused on the wrong things.

A similar number — 49 per cent — believe top cops care more about the public’s perception of their force than solving crimes effectively.

But in a boost for Mr Johnson, most Brits support the measures he announced last week to make streets safer.

Nearly half — 45 per cent — think that giving victims a designated police officer as a point of contact will make a real difference to victims.

Six in ten reckon it is a good idea to make offenders wear hi-vis jackets on community service to set them apart from the public.

And 46 per cent believe sending a cop to every reported burglary, a policy being trialled in Manchester and surrounding boroughs, will improve prosecution rates.

The poll also showed that most people believe senior officers should focus more on tackling knife crime, robbery, sexual assaults and gang culture rather than trying to track down online trolls and deal with hate crimes.

And they want officers given more stop and search powers — backed by tougher penalties for offenders brought to court.

Our poll reveals that trust in cops is still high, but almost half of respondents are more worried about becoming a crime victim now than in 2016.

Most believe every burglary should be investigated as a matter of course, while tougher sentences, more patrols on the streets and higher funding were seen as the key to combating crime.

A large percentage were also behind the PM’s law and order blitz which would see high-visibility chain gangs and extra support for victims.

The work of the thin blue line has been brought into sharp focus during the pandemic over the past 18 months.

They have been criticised for being too heavy handed after storming mourners at a vigil for Sarah Everard, who was murdered by Met cop Wayne Couzens.

It has also left them exposed to accusations of being too “woke” after some officers took the knee at a Black Lives Matter demonstration while others danced with climate change activists.

But it was clear where the public stood on the priorities of senior officers.

Victims said police investigations take too long and they are kept in the dark about the progress of a case.

Tory MP Tim Loughton, who sits on the Commons home affairs committee, said: “When so many reports of fraud and other low-priority crimes are terminated abruptly by paperwork from anonymous administrators stating no further action, people question the point of reporting it in the first place.

“When it is difficult to attract the interest of the police in turning up to investigate evidence on more serious crimes, people’s confidence is understandably severely dented.” The Met Police were criticised for their use of force at the Sarah Everard vigil, who was murdered by Met cop Wayne Couzens

Our survey of 1,500 adults by Redfield and Wilton Strategies, asked respondents to pick the areas where they think police should focus their attention.

Knife crime, sex assaults and gang activity were the most popular choices while online trolls, hate crimes and community outreach work were bottom.

Former minister Mr Loughton added: “The survey shows what the British public’s priorities on policing are and it is not rocket science.

“They want tougher action to prevent knife attacks and other violent crime so they can feel safer.

That starts with intelligence gathering that the modern-day bobbies on the beat, PCSOs, can bring when they are high profile, accessible and engaged with local communities.

“It then means turning up swiftly when a crime is reported, listening seriously to the victim and keeping them properly informed about what action can or cannot be taken and why.”

Mr Loughton added: “It means much tougher consequences for the perpetrators when caught.

“And when the police’s priorities do not appear to be the people’s priorities, we have elected Police and Crime Commissioners to hold chief constables’ feet to the fire — and that needs to happen a bit more often.” Did you miss our previous article…
https://www.hellofaread.com/politics/eu-flag-can-no-longer-be-flown-in-uk-without-government-permission/

Queen could take a ‘step back’ from duties after Duke of Edinburgh’s funeral, royal...

Japan agrees to slash punishing import taxes on British bacon as part of an...