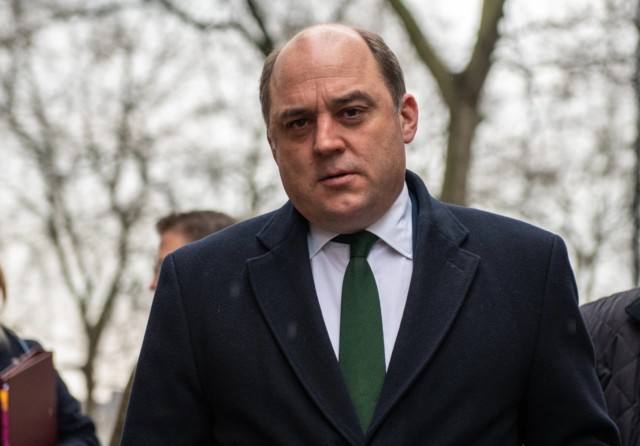 The Defence Secretary confirmed for the first time that Russia has deployed barbaric thermobaric weapons in their invasion.

Thermobaric missiles suck in surrounding oxygen before exploding in a blazing fireball to obliterate everything around it.

Mr Wallace said the Kremlin gangster’s “illegal” war would leave him a global pariah “for decades to come”.

Ukrainian officials said more than 2,000 of their civilians have been killed in the seven days of bloody fighting.

Speaking on a trip to Estonia Mr Wallace said: “How far he will go, what weapons he will authorise to achieve his ultimate aim is unknown.”

But we have seen the use of massive amounts of artillery, we’ve seen the deployment of thermobaric artillery weapon systems and we worry how broad those could go.

“So whatever happens in Ukraine, and we hope and support the Ukrainian government and its armed forces resisting Russia, there is a line that has clearly been crossed and that will have an impact on Nato and its defence.

“It will have an impact on the neighbours and their views and their fears.
“And right across the world, people will wonder what type of Russia we are going to see as a result of this invasion.”

Whitehall sources stressed deployment is not the same as use, and there are no verified claims of thermobaric weapons being used yet.

Although local Ukrainian officials claimed some were dropped near Kharkiv earlier this week.

Western officials are however worried about Putin using cluster bombs in civilian areas at grave cost to life.

Targeting civilians is a war crime and a case has already been referred to the International Criminal Court.

Speaking directly to tyrant Putin today, Mr Wallace said: “It isn’t too late to stop what you are doing… you risk being isolated for decades to come.” How old was the Queen during World War 2 and did she serve in...

Huge 2-mile asteroid will be visible from Earth next month – and is deemed...

Make smart use of your smartphone with the best apps to help you save...

What is the new Harry and Meghan biography ‘Finding Freedom’ about and who wrote...